The windmill blades found throughout the level are the most obviously changed elements in this stage. In the prototype, the blades are sharper and the center of the blades is less detailed. The blades were rounded off for the final. Furthermore, every last windmill in the level is positioned differently between the two versions.

The four DeluPipi enemies are replaced with 3 Row Bird flocks and a TeruTeru.

The sample has an extra set of windmill blades. The platforms to the right of the first ladder are changed to a different design and brightened for the retail version. The platform underneath the large energy capsule is longer in the prototype.

The final build changes the Spiral Gabyoall to a TeruTeru and adds an extra Row Bird flock.

Along with the usual windmill blade adjustments, the last cloud cover is a bit larger in the retail version.

The second Tripropellern is a bit closer to the platform in the final build.

The lone fan platform was changed to a glass platform for the final build, and the Petaforce enemy was replaced with three Gobots. 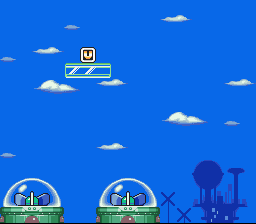 The "U" circuit plate isn't present in the prototype, leaving this platform conspicuously empty.

Some extra detail was added to the walls in the final version in the form of hexagonal-shaped decorations. Whatever those are.

The latter half of this section uses obvious placeholder graphics in the prototype. They're changed to metallic tiles unique to this area in the retail version. An extra DeluPipi was also added.

Like the rest of the level, the windmill blade edges have been rounded off. The blades and second smallest clouds were also darkened a bit in the final for perspective purposes. The smallest clouds in the prototype don't appear at all in the final version. The rectangular buildings(?) in the clouds are more colorful in the sample.

Just a palette change. It goes from sunset to...that time of day when the sky is purple.