The Intro Stage has the most layout changes of all of the stages in the prototype. The latter half of the stage is changed the most. The Sample version's layout has a good deal of vertical movement, and there are unique graphics showing the highway in much worse shape.

The sample version's art design for the highway is of a slightly overhead view, while the final version uses a flat perspective. As a result, all of the vehicle background art was removed from the final version. The palette of the shrubs was also changed.

Whoever built this highway in the sample version didn't do a good job: Parts of the road will rise or fall when you get near them!

There's a cutscene on this stretch of road in the final version, so these objects were removed. However, the cracks indicating the rising / falling road sections are still visible.

The Bass battle is fully coded, but the dialogue presentation is different. The final version uses word balloons, while the prototype uses a black box, similar to the dialouge boxes from Mega Man X. The font is also simpler and uses a different palette.

The dialouge boxes in the prototype also spin. This spinning happens every time a dialogue box is opened or closed. Thankfully, this doesn't happen in the final version. 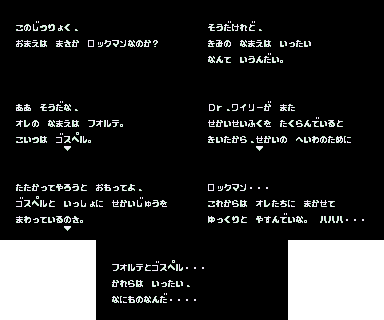 This dialogue is different from the final version's. "This power... You aren't Rockman, are you?" "So I might be. You'd better tell me your name." "Okay then. My name's Forte. This here's Gospel. Dr. Wily is planning world domination again. For the sake of world peace, someone will have to fight him. Together, me and Gospel are changing the world. But Rockman... because of you, we won't have to worry about it. Hahaha!" "Forte and Gospel... what's up with those guys?" 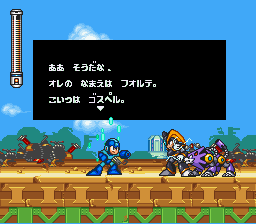 An odd glitch is present here. The player can pause the game while this cutscene is playing. If you switch to a different weapon, you regain control of Mega Man.