Although only a few are actually functional a this point, all of Mega Man's weapons can be added to the status menu via hacking.

The most obvious change is the different menu borders between versions. Some borders between the different sections of items (blue, pink, and orange) were added to the final version's menu. Burn Wheel and Danger Wrap swapped places in the final. Note that L/R weapon switching in the final still goes by the sample's order! Rush Search and Rush Coil also swapped positions on the menu. The NEXT buttons have a right arrow in the sample, but it's not there in the final build. The Exit Adapter slot and second NEXT button are spaced further apart in the retail version.

There's an icon for a Beat Weapon in the sample! This weapon choice actually remains in the final version, but its icon is missing.

The icon for Thunder Strike is the largest weapon graphic change. In the sample, it looks like the Thunder Beam weapon from the first Mega Man. The final's icon reflects how the weapon actually looks. Since the graphics for Thunder Strike aren't in the prototype ROM, this may have been the original design for that weapon.

The Rush Search and Blues Shield also have icon changes. The sample has a little target, the final is a picture of Rush's head. The Blues Shield's icon is thicker in the final version.

There are only two alternating palettes for Mega Man in the sample: his default, and the Rush item palette. 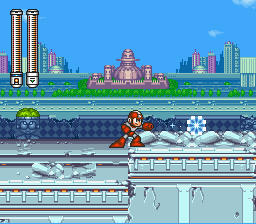 This weapon is very close to being completed, as the shot physics and graphics have been finalized. However, in the retail version, there's a 10 frame delay for the Freeze Cracker to form after firing. The sample shoots it out right away. Sound effects have not been implemented yet.

7E0B85:F0
Programming for this weapon has not yet started. There are no associated graphics in the prototype.

7E0B87:F0
Not programmed in, but all of the appropriate graphics are in the ROM. Object Number is 43. 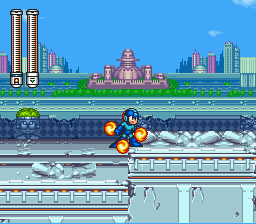 7E0B89:F0
Close to being completed. There's an animation of Mega Man sticking his arms out to form the Scorch Wheel in the final, which has not been implemented yet. The Scorch Wheel will spin around you indefinitely as long as you hold down the fire button. The final will fire on its own in roughly two seconds. The final's wheel also falls apart when it hits an enemy, something that doesn't happen in the prototype.

7E0B8B:F0
Programming for this weapon has not yet started. There are no associated graphics in the prototype.

7E0B8D:F0
Not programmed in. However, the number of shots on screen for this is 2, just as in the final version. The other weapons in the sample have a limit of 1 shot on screen. All of the appropriate graphics are in the ROM. Object Number is 41.

7E0B8F:F0
Not programmed in, but all of the appropriate graphics are in the ROM. Object Number is 42. 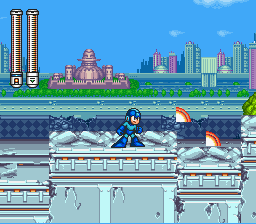 Partially programmed, though there are no associated graphics. You can't charge this weapon yet. It's a bit bugged: if you face left you'll get the coils to come out to the left and right of Mega Man, as planned, but facing right shoots out two coils to the right. No sound effects for this weapon yet.

7E0B93:F0
Programming hasn't been started yet. Graphics are not in the ROM. 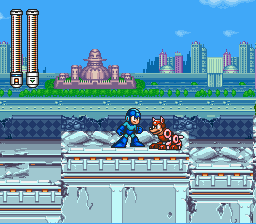 7E0B97:F0
Coding for this has barely been started. Rush will come down and stay in this pose forever. The graphics for Rush Jet are in the sample ROM already.

7E0B95:F0
This is identical to the Rush Jet, but not all of the appropriate graphics are in the sample ROM. Only the barking and sniffing animations were found.

Partially done. The physics and sound effects are finalized, but the transformation sequence with Rush is not present. When the player switches to this weapon and presses the fire button, the suit instantly activates.

7E0B9B:F0
Not programmed in, and the graphics are not in the ROM. Since the final doesn't have any related graphics or code either, it's likely that this weapon was abandoned in favor of the Beat Rescue before any work was done.