From The Cutting Room Floor
< Proto:Purble Place
Jump to navigation Jump to search

This is a sub-page of Proto:Purble Place.

The earliest available known Purble Place prototype, was included with Windows Vista Build 5219. It has a lot of differences compared to the final game. It doesn't work on Windows 7 and above, as clicking any of the buildings there does nothing and crashes the game. Interestingly enough, this prototype is actually compatible with Windows XP! 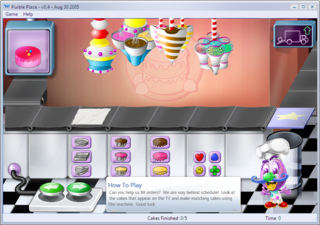 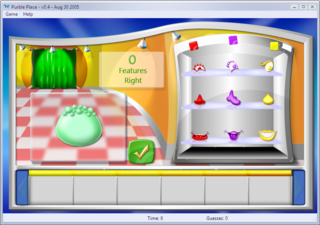 Interestingly, an unseen minigame is documented in the help files, named "Purble Family". The gameplay would involve the player dragging family Purbles from the left side to their houses on the right side. Nothing for it is found in the game files, though.

As with other prototypes of the pre-bundled Windows Vista builds, this build includes a debug menu. 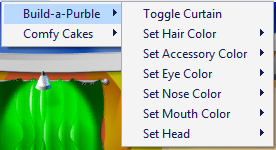 The only option that appears to work here is "Toggle Curtain", which toggles the visibility of the curtain.

None of the options shown here appear to work. Reload Variables might have been intended for what its name speaks, and Time Attack Mode would've enabled the automatically-sliding conveyor belt mechanic.

There are graphics for unused Purble Shop features left in the spritesheets, one of which only has a shelf graphic. They were either intended as third available feature graphics, or early features.

Earlier versions of the green hair and yellow nose features, with an artstyle that's different from what the prototype itself uses. 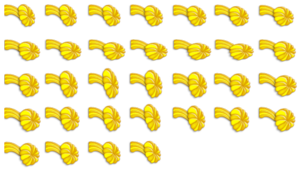 Leftover .psd file of one of the yellow hair graphics.

This appears to be an earlier version of the roasted chocolate icing, heart-shaped.

A (possibly) scrapped game mode. It's unknown what minigame does this belong to.

Found in Windows Vista Build 5219's Windows\Help\Windows\en-US\gamesh1S\games_inbox_new.xml is that the term "Purble Place" is not documented, but instead, "Learning Fun" is. This suggests that "Learning Fun" could be an early name for Purble Place. This is further supported by the fact that the help file for the prototype is "games_howto_learn_IT.xml".

Retrieved from "https://tcrf.net/index.php?title=Proto:Purble_Place/Build_5219_Prototype&oldid=1346556"
Categories:
Cleanup > To do
Subpages