From The Cutting Room Floor
< Proto:Rayman 2: The Great Escape
Jump to navigation Jump to search

This is a sub-page of Proto:Rayman 2: The Great Escape.

This article refers to the first PC demo released from Rayman 2. It can be downloaded from here:
http://www.fileplanet.com/23184/download/Rayman-2-Demo

This demo features two levels from The Fairy Glade, but only one is normally playable due to a bug. It also doesn't have any music or sound.

A second revision of the demo was made later (with the same levels), adding sound, fixing the jail counter, fixing the crashing bug, fixing some strings, reordering the intro animation, and using the non-rechargeable fist. This second revision uses the early Rayman model (with one eye more open than the other) for some reason.

Despite two levels being present in this demo, only one level can be played normally. After completing the first level, the game crashes.

A workaround was discovered to play the second level:

A mistake in the Spanish translation for one of Murfy's sentences makes the text get out of bounds. 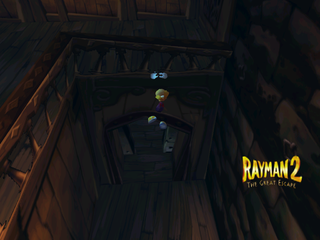 Despite the demo only containing two levels, the demo includes strings from the full game, including dialogues, level names, and menus.
These strings are slightly different from the final!

Inside these strings, we can also see some cut menu options, like Antialising, Sharpness and Cheat.

There are lots of textures from the final game in Textures.cnt that aren't used in this demo. However, not all the final textures are present.

In the main folder, we can see a debugging character set in the file Polices.tga. This charset is used for a debug level selector.

There are some Rayman abilities from the final game in the Demo's code, but left unused. Here are some of them: 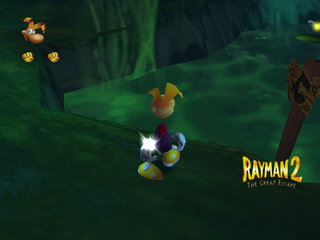 While this game has no sound, there's a working sound script file in BinData/World/Sound/ folder for a different sound engine from what was used in the final version. It has the following header:

This script tries to play BNM sound files that doesn't exist in the demo files (it doesn't play APM music files).
If we enable sound in the Snd_Cpa.ini configuration file (it's disabled by default), and then copy Bnk_0.bnm with the final game sounds to BinData/World/Sound/. Sounds will play, but almost all of them will be incorrect, as the sound file might been altered from that point of development until the final version.
Copying all the final game sound files to the demo sound folder makes the demo crash.

Pressing F9 will enable a level selector which displays Change To Map : Bast_20 at the upper-left corner of the screen with the debug charset. Pressing Up/Down you can switch to Bast_22(the second part of the level) and pressing Space you can access it (you must do the previously mentioned workarround before to prevent the game from crashing). You can cancel the level selection by pressing A.
You can also reset the actual level at any moment by pressing F11.

Running the demo generates an Error.log and test.log files. The first one logs lots of messages from the game libraries, while the second just logs

There's a very complex HTML memory dump generator routine at 0x0047B030 that generates a HTML file called MemoryDump.html at the Game folder. It can be triggered at level start by setting the byte 0x00542C50 to a non-zero value.

There is a debug byte at 0x00542CF0 that seems to enable some demo feature when it changes to 1. However, it actually crashes the game. Changing this byte value to 2 resets the actual level and sets the byte value again to 0.

Retrieved from "https://tcrf.net/index.php?title=Proto:Rayman_2:_The_Great_Escape/Early_Demo_Version&oldid=756644"
Categories:
Cleanup > To do
Subpages