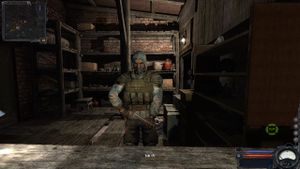 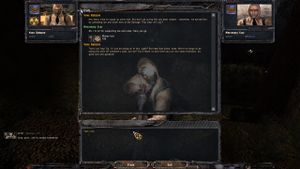 The Cold's bar music present in Build 3436 seems to be a raw short version of the final theme.

The hit probability in the build is much worse than final (especially on Master difficulty where enemies seem to hit you 100% of the time). However, these changes do not seem to actually affect anything because of the actual hit probability values lying in another file, defines.ltx.

A lot of text has been changed between this proto and release version of the game.

mar_csky_tech_name, text string containing the name for Clear Sky tech, got changed before the game got released due to Cold's voice line where he is called Gray — his prototype nickname. While in Russian the line got revoiced-over, his name got changed in the English localization instead, which later resulted in inconsistency between Clear Sky and Call of Pripyat.

agr_weaponmaster_name is missing in B3436, while only agr_weaponmaster string exists (in release they both are in the files). This results in his technical name being displayed.

Some generic dialogues and text strings usually not belonging to any specific location.

tm_random_task_1, a phrase used when squad commanders talk about the jobs they need to get done, used to have a slightly different verb.

st_esc_q6_n, the name for Sid's stash has been changed. The original one in Russian version could be translated as "Do go in — it will not kill you" which mocks a pretty famous phrase "Do not go in — it will kill you" usually written on electrical shields all around CIS countries. The pre-release name had tried to localize the joke by mocking "Do not trespass" sign, while the final version tried to stick to the original meaning.

gar_bandit_fixer_questions_131 and gar_bandit_tech_questions_131 that seem to share the same message both got changed slightly. Someone originally took a liberty here with a 'pun unintended' message. Got changed probably due to the original text not having this wordplay. A shame.