From The Cutting Room Floor
< Proto:Shadow of the Colossus
Jump to navigation Jump to search

This is a sub-page of Proto:Shadow of the Colossus.

The executables and data files are dated 10/08/2005, putting it after the OPM demo but before the PlayStation Underground demo.

The world map in Shadow of the Colossus is divided up into 81 squares, categorized into an alphanumeric grid. The map is bigger than it needs to be, however, as the developers initially planned to include 24 Colossi (pared down from a conceptual 48) and their respective arenas. Because the preview version of the game is a build that dates from an earlier point in development, it contains more leftovers of the developers' original vision.

The blue squares on the map indicate quadrants which contain unfinished mountains. Compare with a map of the unfinished areas in the final game. 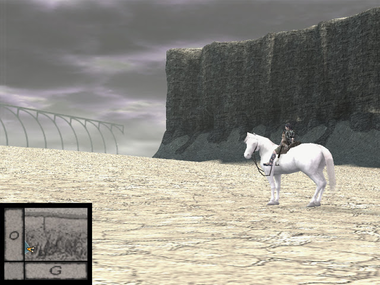 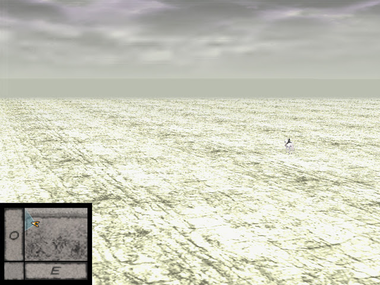 A large expanse of flat land at E0. 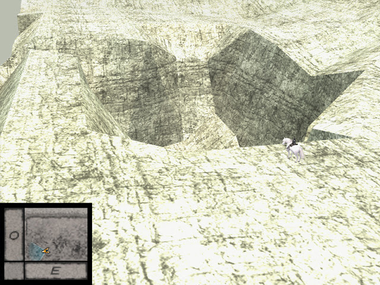 A large crater at E0. 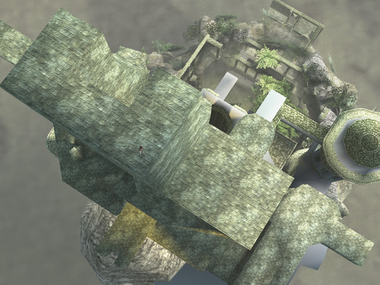 While the very top of the Shrine of Worship cannot be legitimately reached by the player in any version of the game, only the Preview version of the temple has collision data, in fact every ledge is grippable, suggesting that at one time there were plans to have the player climb the temple. But in this version the higher levels can be accessed by using the R2+X command using a second controller while riding Agro. This will lift Agro into the air and by continually hitting R2 the horse will keep rising higher. So by positioning Agro in the secret garden, you can reach the top of the temple using this method. Why this function exists in the Preview version is a mystery, but it may have been used for testing purposes?

Each time you save your game, your save file will record the name of the shrine you saved at. The preview version of the game has different names for 11 of the save shrines. The preview names seem to adhere more closely to the original Japanese.

Retrieved from "https://tcrf.net/index.php?title=Proto:Shadow_of_the_Colossus/Preview_Version&oldid=657422"
Categories:
Cleanup > To do
Subpages