This is a sub-page of Proto:Sonic Chaos (Sega Master System). 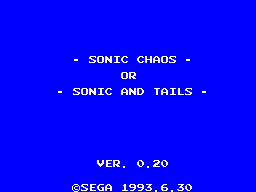 The June 30, 1993 build of Sonic Chaos is considerably more fleshed-out than the May 17 Game Gear prototype, but it still has a ways to go.