From The Cutting Room Floor
< Proto:Sonic the Hedgehog (Genesis)
Jump to navigation Jump to search

This is a sub-page of Proto:Sonic the Hedgehog (Genesis).

Labyrinth is less complete than the previous three Zones, lacking lots of things and not even being playable normally (the game skips from Sparkling Act 1 to Star Light). As a result, Labyrinth Zone can only be played via the level select.

A completely different background is in use at this point that, strangely, changes Y position with each Act. Act 3 has no background at all!

The background doesn't seem to have logically been designed with vertical looping in mind, which may be why it was overhauled.

Brick wall tiles, which aren't seen in the final (but do show up in the 8-bit version's background), cover certain areas of the stage. In the final game, said areas mostly feature water bubbles and some would even require unlocking through the use of a button, which seems to suggest that they were originally meant to be air pockets before the bubble mechanic was introduced. To back up this theory, the underwater palette in the final game (missing from the proto) did not update the colors intended for these tiles, which still appear in their dry state when re-implemented. Though this does not last for long, as those palette slots are immediately replaced by color cycling for the chain system. 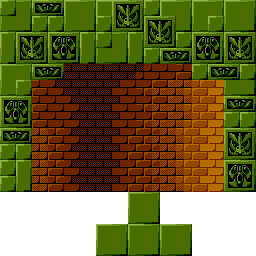 Pillar decorations are absent from this build too.

Seems to end prematurely in the prototype, with the camera scroll stopping at X coordinate 17BF, while in the final it stops at 19BF. Not that it matters much, since the lack of a signpost makes the Act impossible to complete.

When the stage is first loaded, a graphical error can be seen when walking down the initial path.

As seen in the embedded video, the very start of the level contains a weird vertical zipping bug that allows Sonic to stand on thin air and even outrun the camera for a few moments. This was fixed in later versions by adding a block object on top of the platform and disabling vertical looping for this Act.