The KNUCKLES THE ECHIDNA IN banner above the title screen emblem isn't implemented yet, but the emblem still descends to make room for it. Graphics for the banner do exist in the ROM however, even though they go unused. The PRESS START text is positioned slightly lower then in the final.

When Knuckles goes Super in this build, it still uses Super Sonic's palette. The final uses the palette from Sonic & Knuckles.

When the Super form wears off, Knuckles mistakenly uses Sonic's regular palette. This is fixed in the final. 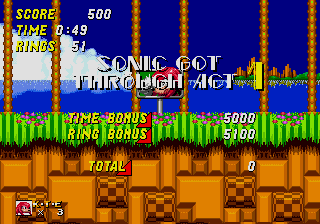