From The Cutting Room Floor
< Proto:Spyro: Year of the Dragon‎ | April 25th, 2000 build
Jump to navigation Jump to search

The majority of the Midday Garden worlds are present and playable in this version, with the notable exceptions being Enchanted Towers, Spider Town and Midday Garden itself. It appears as though these worlds took priority at the beginning of development.

This level can be accessed via the "Iceberg" option on the level select or by using the "Thief Chase" and "Figure Skating" options on the minigames menu. The internal list of level names lists this level as "Level 21". 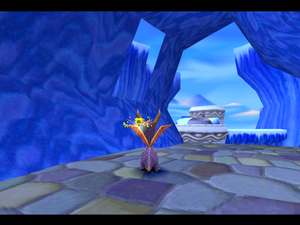 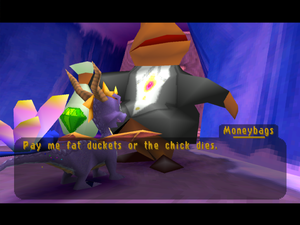 Most of the dialogue changed, though a couple of Bob's lines stayed the same in the final. Moneybags seems to have an unused line, too.

This sublevel can be entered directly via the "Thief Chase" option in the minigames menu.

This sublevel can be entered directly via the "Figure Skating" option in the minigames menu.

Three lines of Nancy's dialogue were unchanged, but the rest is different - if only slightly.

The thieves hold the somewhat unique egg ID 132 (which are green with a white patch). After defeating the thieves, however, the dragons will instead hatch from more common egg types. Should these ID 132 eggs be forced to hatch via hacking, they'll simply spawn the same dragons they normally would.

In fact, the same dragon uses these earlier textures in the final game, too - the fact that they're still only present on one dragon at this point in development suggests they were likely used in even earlier versions of the game to this one.

Two of the six dragons in this level are not present in-game, and go entirely unused.

This level can be accessed via the "Swamp Party" option on the level select or by using the "Mini Boss" and "Roo Stomp" options on the minigames menu. The internal list of level names lists this level as "Level 23".

Frankly unforgiveably, none of the dialogue is in Haiku form in this version.

This sublevel can be entered directly via the "Mini Boss" option in the minigames menu. 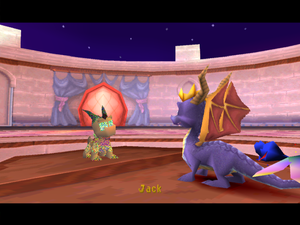 Jack, as seen in-game, appears to have corrupted textures.

This sublevel can be entered directly via the "Roo Stomp" option in the minigames menu. 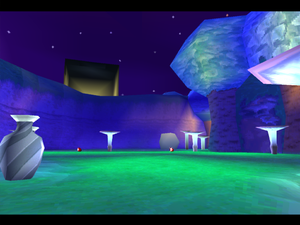 The critter room, as seen from the level.

Like in the main level, all dialogue is centered in the final, but is left-aligned in this version.

Sheila has one line of dialogue:

Both twins are called "Myopic Twin" in this version. Like the final game, both of the twins use identical (or near-identical) dialogue blocks. The final dialogue used below is Basho's - places where Buson's is different are referenced within the notes.

Notably, Jack appears to have corrupted textures. The dragon seems to render correctly in model viewers, so it's assumed that the while the textures themselves are not corrupted, they render as corrupted in-game.

This level can be accessed via the "Rice Paddies" option on the level select or by using the "Rhynoc Blast" option on the minigames menu. The internal list of level names lists this level as "Level 24". 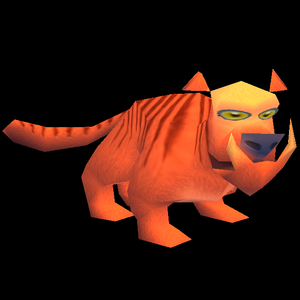 Ling Ling isn't present in this build, and none of their dialogue is, either. Interestingly, though, the name Ling Ling is used by the character in the Rynoc Blast sublevel, rather than being called "Shui" like in the final game.

This sublevel can be entered directly via the "Rhynoc Blast" option in the minigames menu. 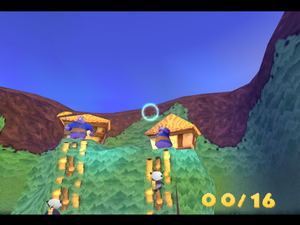 Shui's dialogue is all different from the final game.

This level contains the data for an unused dragon name and model. Assuming that these correspond to the same dragon, it appears as though this is the dragon which would eventually become Pee-wee in the final game. Though the color and animation used by the dragon matches Pee-wee, the name is - confusingly - Madison, a name which was used by another dragon in the level in the final game. Other than the name, it also differs from Pee-wee in that this dragon is not wearing glasses:

One of the few levels in this version using its final name. Despite this, in the internal level list, the level is called "Level 25". 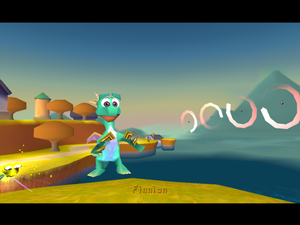 Finnian, as seen in-game, appears to have corrupted textures.

As Hunter is not yet present, the only dialogue present is from Sparx. All of this dialogue changed in the final.

For some reason, the rainbow produced by Finnian seems to show corrupted textures in-game.

This level contains the data for an unused dragon name, an unused dragon model and an unused egg moby. Assuming that all of these correspond to the same dragon, it appears as though this is the dragon which would eventually become Roberto in the final game. In fact, the only way in which it differs from Roberto is in its name:

This level is named "Sgt. Byrd's Home" within the level select menu, but the internal list of level names lists this level as "Level 26". 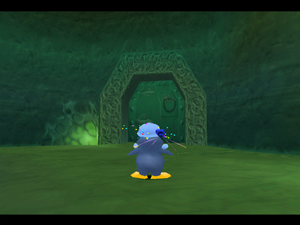 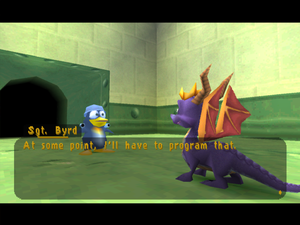 Practically all of the dialogue was changed in the final game, with some lines containing some amusing developer notes. The only line not to change was the "Leave the level?" prompt. Strangely, all of the caged hummingbirds refer to the player as "Spyro" rather than "Sgt. Byrd" when freed, oops!

Oddly enough, Myles's feet are missing the toe texture in this version for unknown reasons. This was corrected later in development.

The internal list of level names lists this level as "Level 27". This level is not accessible under normal means using the level select menu, but can be accessed using memory editing or with the following cheat code: 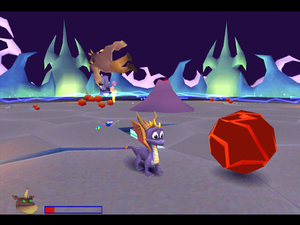 Like many levels, this level uses the Spooky Swamp theme as a placeholder. Sgt. Byrd and the player's vehicle are not present in this version, nor is any of Sgt. Byrd's dialogue.

The fight takes a slightly different format, with all of Spike's hitpoints requiring he be hit with a boulder, instead of only the first two or three. Spike has about six hitpoints in total, and Sgt. Byrd is not present to assist the player (nor is any of his dialogue). The health bar is on the bottom left of the screen and has a blue rim, rather than being on the bottom right with a yellow rim. No egg is awarded to the player upon completion, but some data corresponding to a dragon is present.

When attacking, Spike first absorbs the boulders into his weapon just as he would with the powerups in the final. The attack he performs depends on how many hit points he has remaining.

The volcano has no low poly model, and can disappear from view when the player is only a short distance away from it.

Spike also uses his usual electric ball attack in all stages of the fight. The bullets shot by Spike seem to home towards the player quite a bit more than they do in the final game.

Spike seems to have a smaller hitbox than he does in the final, and the player can hug against his legs quite tightly to avoid taking damage from his attacks. Under certain (currently unknown) conditions, the skybox graphics in this level may begin to de-render, which can result in some unusual and dramatic visual glitches.

The skybox seems to be missing its bottom half, and the top half seems to be colored slightly differently. In normal play, the bottom half of the skybox is difficult to see, due to the "bowl" shape of the level.

Like most levels in this build, this level uses Spooky Swamp's theme instead of its final theme. The Spike's Arena theme is not yet present in this version.

The following levels are not playable in this build. The names listed alongside them are the names given to the levels in the internal level list.