From The Cutting Room Floor
< Proto:Spyro: Year of the Dragon
Jump to navigation Jump to search

This is a sub-page of Proto:Spyro: Year of the Dragon.

The earliest known demo of Spyro 3, the Crash Bash and Spyro demo, contains a multitude of differences from the final game. It features three levels from the first homeworld. This is an NTSC-U version of the game.

Comparisons to pre-release builds suggest this version might be as early as May - June 2000, given that it appears to be slightly earlier than a build that was first revealed on the June 23rd 2000 embargo date. Some evidence within the data suggests a possible build date of May 25th, 2000. 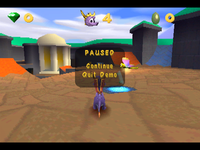 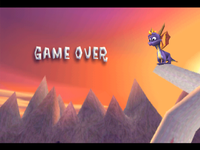 The textures removed from the final game. The second and third seem to go unused.

As with all levels in this demo, the gem placement is quite dramatically different.

Note that on top of the addition of a whole bunch of gems, one of the green gems was removed and a red gem was placed nearby.

Differences are in bold.