This is a sub-page of Spyro the Dragon (PlayStation).

The Foil Demo is a standalone demo of Spyro the Dragon that released after the final NTSC-U and PAL builds of the game. It features the first homeworld along with two of its levels.

On the surface, this demo is nearly identical to the one present in Crash Bandicoot: Warped. Contrary to popular belief, this demo is not a prototype build, and is in fact one of the latest released versions of the game. 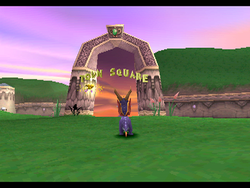 The portal to Town Square replaces that of Stone Hill. 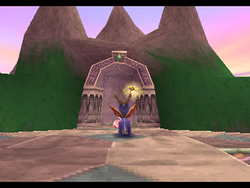 Meanwhile, Town Square's portal does not work and is blocked by a stone wall. You can still hear the portal, but flying in from behind reveals that the portal isn't actually there. 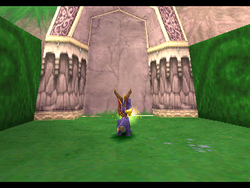 This also applies to Dark Hollow. 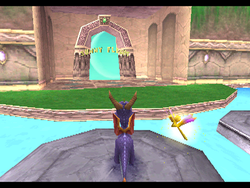 Sunny Flight is automatically open upon starting the demo, unlike in the full game where you have to leap on the stones in a certain sequence to unlock it. 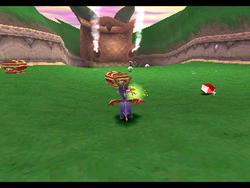 Toasty is closed off completely, but... 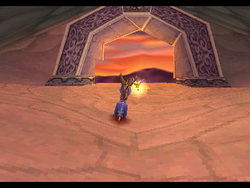 ...If you use hacking tools or glitches to make your way in there, the portal is open! In this squashed state, no name is displayed on the portal. 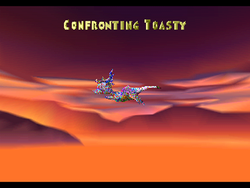 If you attempt to reach Toasty, Spyro's palette will glitch out, and the game will softlock with him flying.

Below are the reviewer quotes seen in the demo before the game starts loading.

Retrieved from "https://tcrf.net/index.php?title=Spyro_the_Dragon_(PlayStation)/Foil_Demo&oldid=769995"
Categories:
Cleanup > To do
Subpages