Spyro the Dragon is the first game in what would become one of the PlayStation's best selling and most iconic series. Gnasty Gnorc has crystallised the inhabitants of the Dragon Realms in a fit of rage, and it's Spyro's job to free the dragons, reclaim their stolen treasure, and toast some gnorcs!

Three of the game's demos were built after both English-language final builds.

A rather cryptic compendium of text, repeated multiple times to fill up leftover space on the disc, can be found in the "DRAGON" file, containing extracts from Shakespeare, Dickens, Melville, Edgar Allen Poe, and other esteemed authors. It reads:

Insomniac also managed to sneak this into the files of the second and third game. The term "Shemp" is an internal joke among the developers, as if something didn't go as planned, or if someone messed up, they "got the Shemp". It is itself found in the name of the boss Dr. Shemp.

The name listings for all of the dragons and balloonists (as well as Toasty and Jacques) contain a few names which go unused by any of the characters found in the final game.

Notably, Silvus was used in demo builds of the game as the name of the cowardly dragon in the Artisans home, which was renamed to Tomas in the final release. The internal order in which the names are listed implies that they would have been used in Jacques (Rashidi), Cliff Town (Gale), and one of the Magic Crafters worlds (Finlay and Jethro).

The EXE in one of the demo versions references the "Dragon X" string many times in the dragon name pointer array, suggesting that it would have been used for Dragons whose names were yet to be decided. Despite this, prototypes which do contain dragons with undecided names instead show the name "Silvus" in their cutscene, corresponding to the first name in the array.

This... unusual piece of text is grouped in with the world names. This was clearly intended as a joke on Insomniac's part... although could you imagine if there actually was a Thigh Masters world?

This may possibly be a remnant from a time where 7 worlds were planned for the game, and in fact the earliest demo contains inventory data for a 7th world. Should the player access this inventory page, its world name will (unsurprisingly) display as "Thigh Masters".

Grouped in with the graphics displayed on the title screen is an unused life icon. This icon depicts Spyro's severed head in typical platformer fashion, more closely resembling the counters used in the second and third games than the 3D modelled head used for the life counter in the final game. Spyro's head is superimposed onto a metal plate with several cavities around its edge; apparently intended to hold the same life orbs which orbit the life counter in the final game. This graphic is also briefly seen in an early trailer for the game.

Also included within the title screen icons is a text sprite which reads "LOAD GAME" - despite being loaded into VRAM alongside the rest of the icons, it is never used. It's also only present in the data of the final NTSC-U version of the game.

The "WAD" file contains all of the audio resources in the game, but a small number are rendered unused throughout the entire game.

A rather crude "impact" sound, sounding very much akin to a cartoonish "slap". It was found in the files for the Dream Weavers home, and may have been intended for the large feminine druid enemy.

A secondary "death" sound for the Armoured Spider enemy in High Caves, which sounds like it's getting squished or getting hit with considerable force. It may correspond to a scrapped event featured in the June 15th 1998 prototype of the game, where instead of a fairy granting Spyro a "superflame" powerup to dispose of these enemies, the same fairy would shrink the spiders down to half their size, allowing Spyro to defeat them with a normal charge. This feature being changed may have necessitated this sound effect's removal, with the same sound being used regardless of whether you defeated the enemy with the temporary "superflame" power-up or with the supercharge.

Multiple themes are present in the game which play after staying in a level long enough, although the exact circumstances that cause this are unknown and seemingly random. The only reason they play is due to a glitch in the game's audio looping and streaming. Although these themes aren't actually "unused", it's slightly unlikely that most players would hear them, as they only seem to play after most players will have left the level.

Many of the themes are unique tracks not heard anywhere else. Some of the following tracks are only present in later releases of the game. The "Versions" column indicates which versions of the game they're present in.

Several themes are duplicated within the STR files, meaning that a few tracks that are virtually identical to the ones heard in-game technically go unused.

One such track is a duplicate of the Dark Hollow theme without the silence at the beginning.

There's also a duplicate of the Dream Weavers theme which seems to be identical to the one that is used.

On top of that, in the NTSC-U version of the game, a further six tracks are duplicated in order to fill out the last STR file (PETEXA0.STR) to include 8 tracks. These tracks are copies of the six themes that come immediately before the duplicates, and all four of the unique unused themes listed in the table above are included within this list:

By the time of the PAL version's final build, the eight duplicate tracks had been removed. These were replaced with the PAL/NTSC-J version of the High Caves track, six entirely unique unused themes mentioned in the table above and one new duplicate track:

This seems to be a duplicate of one of the unique unused themes, but slightly quieter.

Note, also, that the addition of an updated High Caves theme means that the old theme goes unused in the PAL/NTSC-J versions, as the old theme was not removed.

Prior to the introduction of exit vortices, Spyro would exit the level using a portal similar to the one used to enter the level. These can be seen in some of the game's pre-release material. By the looks of it, Blowhard's exit portal stuck around in its low-poly model. 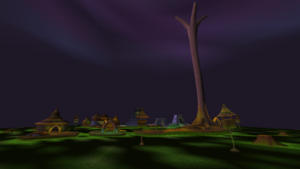 In the Beast Makers home is a giant tree whose upper trunk and branches are normally never seen in-game due to the level's short draw distance.

Several touch ups and fixes were done in the one month between the American and European releases of the game, with the Japanese release maintaining many of these changes.

If the language is set to French, both Delbin and Magnus refer to Sparx as "Étincelle", which would be the French equivalent of his name, "étincelle" meaning "spark". However this name is never used anywhere else, be it in this game's manual or any other Spyro game to come, including the game's remake. It's unknown whether the localization team originally intended to localize Sparx's name (only to drop the idea due to a lack of appeal / for simplicity sake) or if it was simply the result of miscommunication (the person responsible for translating the dialogue not knowing that this character's name was supposed to be left unchanged).

In a similar vein to Crash Bandicoot, the Japanese version of Spyro the Dragon was drastically altered to make it more "suitable" to Japanese audiences, both cosmetically and in certain game mechanics. Considering that the third game wasn't released in Japan, and most subsequent entries followed suit, it seems these attempts at localization were largely unsuccessful.