The Legend of Spyro: A New Beginning (PlayStation 2, GameCube, Xbox)

The Legend of Spyro: A New Beginning is the first entry in the reboot of the Spyro series. Instead of being a platformer like the older games, this game focuses more on action.

A few debug displays can be found in this game. Input any of the following GameShark / CodeBreaker codes to enable them.

If activating these codes on a PlayStation 2 console, input this into a cheat device that supports RAW codes. If the cheat device doesn't support RAW, skip this step.

For the debug info display in the GameCube version, use this gecko code:

Additionally, the GameCube version also has a debug display option for the structure MKCloth. It can be enabled with the following gecko code: 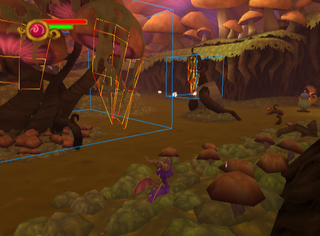 The GameCube USA and EU release has a full debugging symbol map embedded into spyro06.elf.

A level select menu is available in the game, both inside the main menu and inside the pause screen, along with an option to enable cheats, allowing the player to go to any level in the game (as most level selects do). The player's unlocks change from level to level. The level select can be unlocked using the following GameShark / CodeBreaker codes for the PS2 version of the game.

It can also be unlocked in the Gamecube version using the following decripted Action Replay codes.

The GameCube version has an option to load every chunk in the game, with first all the normal levels and then all the flight levels, in the order they appear in the story. The game crashes after the second flight level. It also displays "Autolevelswitch running..." on the screen. 803e5bc0 (PAL) or 803e5100 (NTSC) need to be set to 1 in the GameCube version for this to work. It has an effect whenever a level is loaded, and is effective immediately if a level is already loaded.

Seemingly undiscovered until September 27th 2017, this cheat can be inputted while inside the pause menu.

A few unused graphics can be found inside the game's files.

A placeholder prototype logo can be found inside the game's files. One very interesting part is that it is just the logo for Spyro: A Hero's Tail, but with the subtitle replaced with "Quest".

An unused UI splash image can be seen in the game's files. This exact render of Spyro can be found on the cover art for Spyro 2: Season of Flame.

This might've been used as a gem counter early on. However, in the final game, gems are mainly used for health and mana. This icon is the Clear Gem icon lifted from Crash Twinsanity, possibly as a placeholder.

A debug font texture can be found in the game's files.

This is actually the main menu theme from Dawn of the Dragon, but it is in fact in the files of A New Beginning too. However, this version has a few differences in effects and instruments. This might've been used in a demo for the game since it isn't used in the final game.

In the fourth section of the translations.English.txt file, is this piece of text. Note that this text is translated through every language that the game is translated into.

Not very significant, but in the very first line, this piece of text is present.

Font info for the debug font that can be seen in the unused graphics section.

There are six language files for English, Spanish, Italian, French, Dutch and German in A New Beginning intended for the EU release. Although there's no option to change the language in the US release, they're still present, and wholly accounted for in the game's files.