The Legend of Spyro: The Eternal Night (Game Boy Advance)

Graphics for a Game Over screen can be found in the game data. However, since the game has unlimited lives and the ending does not show this screen, this goes unused. 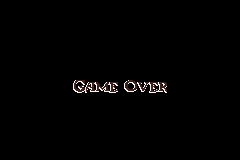 Text for an unused Cheat Menu can be found amongst the menu text. 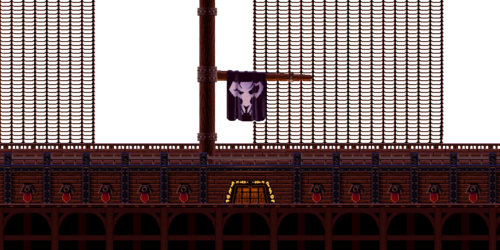 An unused area which appears to be an early version of Fellmuth Arena has been left in the game. There are no enemies and there is no way out.

Two test levels have been left in the game under the name TestMap.

The first test level is playable, but there is no exit. It contains a very crude set of red and blue paths and platforms. The red platforms are normal, whereas the blue platforms are slippery.

Most of the level is blank, although there are a few things here. There are two birds, which fly off when Spyro approaches them, a bush, which moves closer to Spyro only when he's not looking, and a switch which generates enemies on another switch.

The switch works in a similar way to the one found in the Hall of Memory. Each time Spyro presses the top switch, an enemy is generated below. He can either interact with the enemy as usual or press the switch again, which will 'delete' the current enemy and spawn a new one. The game cycles through every enemy you can encounter, except for bosses (although Skragg does appear here, strangely enough).

To access, change the value at 0217ED50 to 38 on the map select screen and start any level.

The second test level is barely playable unless hacking is used. The crude graphics return in a larger quantity, with some not used in the other test level. But in this level, the collision detection does not seem to follow any of the level graphics, and Spyro is limited on how far he can go even when a path has been established. There are invisible water puddles in a variety of places here, but even though Spyro can't swim in this game, he doesn't seem to be hurt by it.

If hacked to move around, there are only a few things in this level worth noting.

On the upper level is a random door which can't be opened. There's nothing visible behind it anyway, though.

Below the level is another one of these doors, though much smaller. Spyro can actually move past this one. After moving forward, the camera will move across revealing Cynder and Gaul (the latter of which can be seen if ducking in the right area when progressing through this level 'normally'). Dialogue will appear matching the scene between them in the game, but the game will soft lock when Cynder tries to reach Gaul because she's placed too far underneath him and there's a wall preventing her from getting to him. If Spyro is hacked next to Cynder before she starts talking, he can leap up and fight Gaul! Since many of Gaul's attacks don't work like they do in the final level (and since both Spyro and Gaul are divided by a mostly hidden barrier), the fight is incredibly easy and can be won with Spyro just leaping up and tossing out a fireball at him when he gets close enough.

If Gaul is defeated in this level, an alternate version of the 'Spyro peers into the well' scene will play and eventually return the user to the map screen.

To access, change the value at 0217ED50 to 39 on the map select screen and start any level.

As stated above, it is possible to access a slightly different version of the scene shown when Spyro peers into the well. This can be accessed in a number of ways, and seems to have been left in as a placeholder for levels that don't exist.

Many of the enemies are palette swaps of each other. In one of the test levels, there are two different enemies with broken palettes that are unused in any other level (for obvious reasons, really).