The Legend of Spyro: The Eternal Night (Nintendo DS)

The DS version of The Legend of Spyro: The Eternal Night is fairly different to the other versions, notably due to the inclusion of mirror puzzles.

A few dialogue tests can be found at offset 0x550A8D of the game.pak.

Three of them, to be exact.

Some leftover fonts from another game developed by Amaze Entertainment, starting from 0xx15990 in the game.pak are still present. 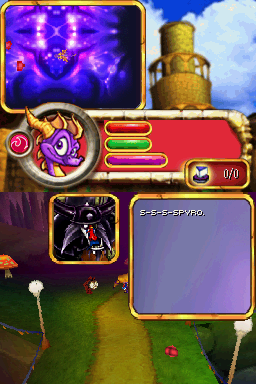 The cutscenes are also able to be displayed as a regular conversation during the game. Since the narrator has no icon, a blank white box appears during his words. However, most other characters (including those who are meant to be "hidden" during the cutscenes, such as Gaul in the opening) have still been programmed to display the correct character icons.