Skylanders Universe allowed players to bring their Skylanders to life online, and customize their very own little corner of Skylands. Shortly after the arrival of Skylanders Giants, Activision announced that it would be closing, and gave all users heaps of resources to enjoy for the final day. 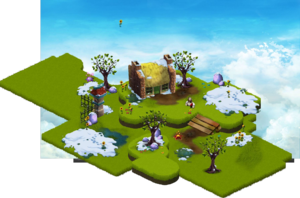 Hidden in the swf file is what appears to be a developers view from part of the main Skyland, complete with a sunflower placed randomly in the air. The image overlays a program. The file is titled springweather.