The fourth world of the game. From this point onwards, all dragons have no dialogue whatsoever and disappear as soon as they're collected.

For some reason, all of the themes used in this world loop every 2 minutes and 4 seconds - the length of Stone Hill's theme. As a result, the themes played in Terrace Village, Misty Bog and Tree Tops are cut off early, while the theme played in Wild Flight has an unusually long silence at the end before looping. 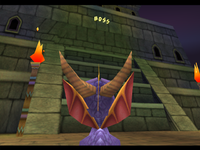 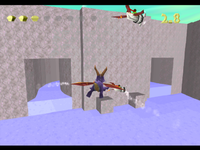