From The Cutting Room Floor
< Proto:Undertale
Jump to navigation Jump to search

This is a sub-page of Proto:Undertale.

The arrows that appear during Flowey's tutorial are further apart from each other and surround the SOUL instead of being under it.

The switch rooms are missing the path and leaves around the entrances.

The Monster Candy room has a missing tile. 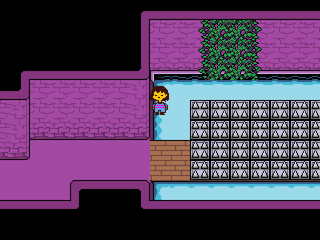 There's a gap in the collision in the spike room, allowing you to go in the water and inside a wall.

There are a handful of typos in this version of the demo that were fixed in the updated version.

Part of Flowey's dialogue is different.

The text for equipping the Stick is different.

Retrieved from "https://tcrf.net/index.php?title=Proto:Undertale/May_23rd,_2013&oldid=1283705"
Categories:
Cleanup > To do
Cleanup > Works In Progress
Subpages