Recca is a self-described "super hard shooting game" that's very modest in describing itself. It's also very impressive for being an NES game, but they don't mention that.

To everyone's surprise, it was released on the 3DS Virtual Console service in North America in 2013.

The intro shows the Sega logo appearing with its usual sound effect, then blowing up. Its replacement, a Nintendo logo, moves down the screen much like the Game Boy startup (complete with a sound effect upon stopping). Both logos have the "e" replaced by a "?".

This music is unused by the game (except for the sound test below). The official soundtrack lists its name as "AD 2302 (Opening Demo [Unused])". 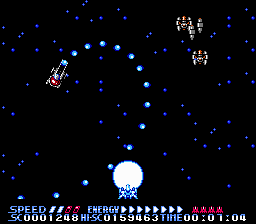 This enemy uses the same sprite as the Stage 1 mini-boss cannons and fires a stream of small bullets while rotating. This object moves along the playfield as the background scrolls. You can replace the first wave of enemies in Stage 1 with this enemy using the following Game Genie code: PAKPXEAA AAKPUEAL 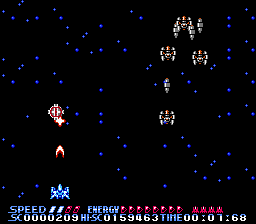 This enemy moves along the playfield as the background scrolls. This enemy blocks all player bullets and can't be destroyed. Most likely it was intended to be used as a blockage. Either something to dodge or something to protect enemies from regular projectiles, or both. You can replace the first wave of enemies in Stage 1 with this enemy using the following Game Genie code: PAKPXEAA TLKPUEAU

At ROM address range 0x00A010 - 0x00B262 are several background related data tables. They are still used in the list containing all backgrounds at ROM address 0x010605. This background uses CHR banks 0x38 and 0x3A, however those banks have been filled with "blank pattern" (a pattern some developers use to fill empty space). The existence of this background data suggests that the CHR data did exist at some point in development. 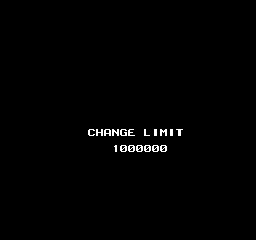 Usually, Time Attack ends after five minutes or when you exceed the score limit of 10,000 points. If you hold Select when the intro starts up then press any button to proceed to the Mode Selection screen, though, you can change the limit to anything from 9 points to 9,000,000 points.

After 2 minutes, if the score limit is not reached, will be game over.

Of course, the mode will still end if you lose all of your lives or run out of time.

To access Level Select, the Sound Test must be entered by holding Select and Start after choosing Normal Game. Once in the Sound Test mode release Select, but keep holding down Start. Next, hold A + B, then each time you press Select it will increase a hidden level counter in the bottom right corner from 1-12, which includes the second quest stages (starting from Level 5). Once you choose which level you want, release all the buttons, and press Start to exit the Sound Test. Starting a new game will now take you to the selected level number.

In Title Screen, start a Normal Game by pressing and holding Start. Then quickly before the screen has faded out, additionally hold A, B, Up and Select. In this mode the player starts with 50 lives and explosions from destroyed enemies will shoot bullets in random directions. Score is ranked by remaining lives. Ending is not shown once game is beaten. This game mode can be played in the second quest stages as well.

Enter the Change Limit screen. Once there hold A, B, Up and Select. Then press and hold Start to return to Title Screen. Then start any game mode (including Zanki Attack) to have infinite lives. 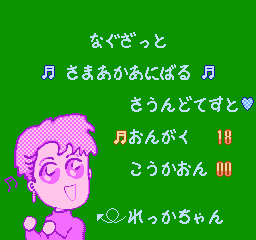 Choose "Normal Game" and hold Select before the screen fades out. When the Sound Test screen appears, one of three otherwise unused songs will play at random. According to an interview with the game's composer, these tracks were created as a joke to fit the bizarre "Recca-chan" illustration the artist created for this screen.

In the original version of the game, the background will flash red whenever you land a hit on a boss, and it will flash white when the boss explodes upon defeat. In the 3DS Virtual Console version, the background will instead alternate between blue, purple, and black at a much slower rate in both cases. This goes with Nintendo's policy of toning down potentially epileptic elements in Virtual Console releases.