Robot Champions is an upcoming arcade robotic combat game that is currently in pre-alpha development, featuring up to 6 robots fighting to the death in completely physics accurate games. 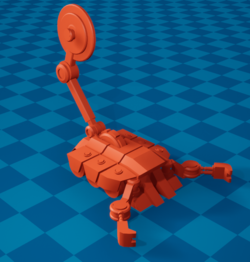 Scorpio was a robot added to the Pre-Alpha in update 0.36 on September 9th 2019 and was the largest robot in the game. It was the first robot to feature 2 active weapons; a set of jaws that clamped onto opponents and a large buzzsaw on its tail that swung onto opponents held in the jaws. The jaws were also the first weapons that could be destroyed, though the tail could not. The community expressed mixed opinions around the robot, complimenting the design and function, but complaining at the bot's cumbersome size, overpowered control weapons and inability to quickly self-right.

Prospect removed Scorpio in update 0.37, just 8 days later, saying 'it clearly needs more work'. After much questioning from the community, Prospect released a statement on their Patreon page entitled 'RIP Scorpio: A Post-Mortem', confirming the robot's demise. The post details the lessons learned from Scorpio's inclusion, and closed with 'Scorpio may return in another form down the line but for now, let's thank it for being a giant buzzkill and move on!'