SCP - Containment Breach is a horror game based on the SCP Foundation creepypasta. It includes a blink mechanic which can be used against you during the most dire of circum- SNAP!

In the game's files, there are a few icons for achievements that do not exist. These are leftovers from SCP Nine Tailed Fox mod, created by Third Subvision Studio.

This model was originally intended to be used as the model for the Chaos Insurgency, or possibly a variant of the MTF, in order to distinguish between members of the task force. The model is similar in appearance to the old MTF models, with the exception of a gas mask in place of a visor. The model can be found in the game's files from v0.6-0.6.6 and can be found in the directory SCP - Containment Breach/GFX/npcs/mtf2.b3d. This should not be confused with the new MTF model, which uses the filename MTF2.b3d from v1.0 on.

There are a few SCPs that were removed from the game. 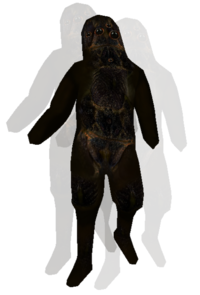 SCP-178 was a pair of stereoscopic 3-D glasses that, when worn, made the wearer see hostile humanoid entities resembling cicadas and jumping spiders. It was added to the game in v1.1 before being removed in v1.3.10. The item was removed for a few reasons, those being that it was deemed useless compared to other SCPs, it basically served a way for players to kill themselves thinking it was an important item, and that its containment chamber had problems spawning due to the spawning algorithm, which made user "achievement runs" difficult to accomplish.

In the game files until SCP-178's removal were a model and two textures: one for the glasses model itself and one for the screen overlay while the glasses were being worn. 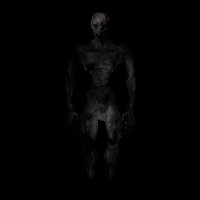 SCP-513-1 was originally in the v0.1 release. Instead of being summoned when the player activated SCP-513, it would appear after the "cowbell" sound randomly played over the intercom. After it appeared it would stalk the player similar to the final version. However, the developer felt that its random appearance would nullify any possible "good" endings as it would continue to follow the player character. It was removed in v0.2. In v0.8 it was reintroduced but could only be summoned by the player activating SCP-513. 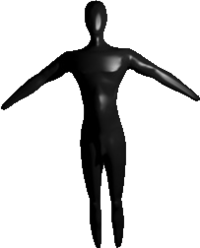 SCP-650 was proposed by a user on the SCP - Containment Breach forums. After reading the proposal, Regalis considered adding it into the game if a model was made due to the fact that it could be easily implemented. Progress for the project became very slow and eventually fell apart altogether due to overall lack of morale from fellow members of the community. Inevitably, all progress came to a halt and no attempts have been made to finish the model. The project is thus presumed cancelled. 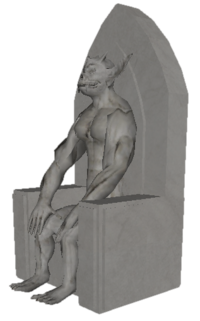 A model and containment room was created for SCP-689 in the hope of better utilizing the eye mechanics in the game. It was intended that whenever the player made eye contact with SCP-689, they would have to maintain it. Should they take their eyes off SCP-689, it would instantly kill them. Regalis (while in favor of better use of the eye mechanics) deemed SCP-689 "too powerful and over-the-top", and decided on not including the SCP in the game. 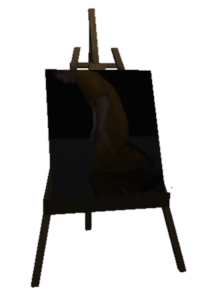 SCP-1074 was a painting that would force the player to stare at it until they eventually died, similar to SCP-012. If the player was wearing night vision goggles or SCP-714 they would be unaffected. There is a model with two textures.

The game has been in development for nearly 7 years, and in that time frame, many major improvements and changes have been made to the game.

The launcher's background image, launcher.jpg, went through some changes as well, including the placement of blood stains.

As the game's development cycle went on, SCPs and other characters have had their models updated since their implementation into the game.

Although SCP-096 was given a new model in v0.6.5, its old model was retextured and repurposed for SCP-513-1 when the latter was re-implemented in v0.8. SCP-096's newer model received a reduced polycount in v1.3 but is otherwise visually unchanged.

Notably, SCP-173 has had the most major model updates of all SCPs in the game, having had three different models. However, the first one was only used during the Indev testing phase, and was changed for the game's initial release. Its current model was implemented in v0.2, and given further improvements in v0.5, as well as a bunch of optimizations through various updates.

One of the smallest visual updates gave the SCP-500-01 pill a new look in v0.9.1. The most noticeable change is the white half of the pill being recoloured red, like the other half.

D-class personnel have had three different models. Notably, the first iteration had a strange broken texture, whereas the third and current iteration has two different texture variants, with one of the variants being based on the second iteration.

The guards, seen in various places across the facility, have had the most noticeable updates of any character, with four different models. The first two models are practically identical, with the exception of the second iteration being untextured. The first and second iteration wielded a HK G36 instead of the FN P90 that the other two iterations have.

Mobile Task Force Epsilon-11 ("Nine-Tailed Fox") was added to the game in v0.5 as a more active version of the guards. The v1.0 update gave them an updated model that makes them visually different to the guards.

In SCP-294.ini, there is some development-related text which is just a guide for how to add your own drinks into the file.