Scaler is a '90s throwback funny-animal-with-attitude platformer, released a couple of generations late for the GameCube, PlayStation 2, and Xbox. X-treme railgrinding metamorphic lizard-boys notwithstanding, it's a solid but overlooked title.

Engine.ini in the root of the disc in (at least) the GameCube version is a leftover engine settings list. It doesn't seem to be checked at run-time; rather, its contents were compiled into the executable. 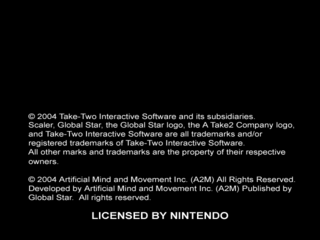 The legal notices "screen" in the game is in fact a Bink video file (/Movies/LEGALS_EN.bik). Sitting alongside this file in the GameCube version, however, is the original bitmap used to create the video, LEGALS_GC_EN.BMP.

While Demo1.bik is the game's attract sequence, the accompanying Demo2.bik is a three-second pan across Bobby "Scaler" Jenkins' basement, as seen in several in-game cutscenes.

As in many GameCube titles, a debug ELF was left on the disc, engine_ret.elf.