Scooby-Doo! Night of 100 Frights is a game based on the original 1960s Scooby-Doo! Where Are You TV series. To quote the game's internal description: "Help Scooby-Doo solve the mystery of who kidnapped the Mystery, Inc. Gang!". You play as Scooby as he hopes to defeat the Mastermind and rescue the Scooby gang. While Heavy Iron Studio's next game, Battle for Bikini Bottom, is considered the better game, Night of 100 Frights is appropriately charming, fun and accurate to its source material. The game was in development from April 2001 - April 2002. [1]

Clamor in The Manor 1 Used to have a two way entrance to the final boss room, Mastermind Unmasked Part 2. However whatever caused the bookcase to open was removed at some point in development.

S006, existing in both the NTSC GameCube and XBOX release, is accessible through hacking. You have to set S006 as the boot file in sd2.ini. You are loaded into the level the developers used to store the ending cutscene. Model assets, animations and textures exist in cin_11.CSN, however it's only possible to extract MODLs and ANIMs so far. Cutscenes in Night of 100 Frights are real time assets called CSNs, however due to developer constrains the only version that usually has real time cutscenes used is the PlayStation 2. S006 is an oddity because it neither exists in the PS2 release nor is used in the GameCube and Xbox releases.

Mnu5.hip or the Mystery Machine menu is an used beta level last edited on 04/04/2002. The Mystery Machine in the hub level used to open up and you could access a 'Mystery Machine Menu' it would give you the option to save, enter the Monster Gallery, controller configuration and adjust sound settings. This level never made it far into development as most of these functions are unusable. [3] Reasons for its removal are speculative, it's suspected previous builds of the game neither had warp gates or Mystery Machine save points. And once these features were added this Mystery Machine menu was no longer needed.

There's a level select debug feature in the Mystery Machine hub level,you can select the start of every area from just in front of the fountain. The main menu (Mnu3.hip) was meant to also have this feature but the trigger was removed.

A readme file is present only in the vn folder from the Xbox release.

There's an unused Creeper enemy in Clamor in Manor Part 1. He needs to be manually edited using another working Creeper from another part of the game to actually spawn into the player space. It's unclear why he was removed because he works fine once activated.

The Playstation 2 Version of this game has dwarf data in the files which means the game has been partially decompiled by user HDSD.

This function refers to the old animation file type used in earlier versions of the game. You can see these file types in both the Playstation 2 and Xbox prototypes that were leaked recently.

This refers to the scrapped sub shaped health bar that you can see in the promotional trailers.

Various Elements That Would Have Been Tracked in the HUD

This is very rich in scrapped features. There are a lot of functions that refer to "Chances", this refers to when this game had a lives system. You see the lives in the UI back in the promotional trailers for this game. It's also worth noting that there are functions like doubleJumps_sum and levelTime_sum meaning the game is programmed to keep track of many variables including the amount of times you get hit. This is further enforced by the existence of the function zGlobalGameStats.

mnu3.hip has three unused posters, one presumably for Hot Wheels: Velocity X, one for Scooby-Doo and the Cyber Chase, and one for the 2002 live action film.

mnu5.hip exists only on the Xbox and PS2 releases.

csd_tongue.dff in boot.hip was meant to be associated with Scooby-Doo while he did an animation known in-game as csd_tonguerun_00.anm, which was repurposed into the running animation you see his model do on the title screen. The model itself was associated with the unused hot sauce powerup. 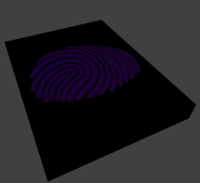 rhtp0002.dff in mun4.hip is a rectangle with a fingerprint on it. This was a placeholder model for a collectible most likely a key. You can see the model being used in build used for the promotional trailers [5]

This configuration file is very rich in not only development history but also an insight into how the game previously operated and what unused items there are.
This file is identical on all versions of the game and is interchangeable.

These differences refer to how Scooby once moved compared to how Scooby now moves in the final release. These are direct quotes from the configuration file.

This powerup doesn't exist in-game (not in a functional way), but it does exist inside the configuration file.

From this we can assume that the Hotsauce was a temporary speedboost powerup.

The Flower Pot and Diving Helmet

At the end of the configuration file where the powerups are listed there are two unused costumes. There is no indication of what these would do in-game. However there is some interesting dev text next to them. Changing these values to 1 doesn't do anything. These powerups were completely wiped from the game.

Clamor in the Manor! Part 1

Clamor in the Manor was most likely going to be a slightly later level earlier in development.

Clamor in the Manor! Part 2

The clock seen in the level actually had a gameplay purpose at some point.

When it was activated:

Clamor in the Manor! Part 4

The slippers were going to have more gameplay involvement.

Weirdly when you turn on the sprinklers this text happens internally.

Interestingly the "you got the Umbrella" text is attributed to Daphne despite Daphne falling into a hole in a cutscene previous.

Developer Ryan Mapes left a message before the Mastermind boss was completed.

Text in this level refers to an unused scene involving Shaggy.

On Edge In The Hedge Part 2

Again the Slippers invention was supposed to be used more often.

On Edge In The Hedge Part 4

This is a minor punctuation difference. There's meant to be an exclamation mark at the end of this text.

Shock on The Dock Part 2

Shaggy has a few unused lines.

There are 11 different retail versions of this game technically, though in actuality 8 of those are actually different to each other and most of those differences come from the game being in a different language. All 11 Versions Include:

USA PS2 and the Greatest Hits reprint are identical to each other in terms of code. English EU PS2 is the exact same as USA PS2 apart from the framerate (60fps for NTSC and 50fps for PAL). The German and French PS2 versions are the same as the other PS2 versions apart from not being in English. Gamecube Version 0 is exclusive to North America and all EU Gamecube releases are based on the patched USA Version 1. French Gamecube has one significant patch in Shock on the Dock Part 2 (you don't die when you enter load zone for Creepy 1 and was patched properly unlike in the Xbox version). English EU Gamecube has misplaced French dialogue in On Edge In The Hedge Part 1. Only differences between PS2, Gamecube Version 0, Gamecube Version 1 and Xbox will be compared because that's where the major and interesting differences lay.

Scooby Xbox shares its base level assets with the Playstation 2 version but has architecture more in line with the GameCube Version. Xbox has it's own individual quirks including:

Shock on The Dock Part 2 has a big sphere (known as FALL2DEATH_OFF_TRIG) around the load zone to Creepy Crawlies in the Hallways 1, this sphere prevents death. Not only is this exclusive to the Xbox version but was only added in a month before that version released due to it not being present in the Xbox Prototype that recently leaked. This design addition allows speedrunners to complete the game in under 16 minutes by abusing this sphere to get to the Creepy Crawlies load zone early.