One of Sega AM2's finest racing games where, instead of NASCAR-style stock cars from previous games like Daytona USA, we got European supercars that were sponsored for the 1996 BPR Global GT Series.

Entering the course select address to 28D4F86 and setting the course value to 4 (only works on the export version of the game), will load the nearly-finished Super Beginner Course. This was later playable in the Japan-only update called Scud Race Plus (although changing to USA will appear as Sega Super GT Plus). The type of start was originally just a standing start because the value for this course was next to Expert Course. The cartoonish music from Scud Race Plus is present but named 'extra' in the sound test, implying that this course was originally going to be a bonus course. This course takes place inside a house, with the vehicles being the size of a toy car. A cat can be seen chasing a mouse around the entire house. Unlike regular courses, the rival cars consists of toy vehicles, such as a rocket car featuring a crude looking driver, a tank that has a World War II soldier's head stuck on the top, and a bus featuring pictures of AM2 employees inside the windows. The bowling was not implemented yet, and as such, has no collision. There are no Race Start screens for this course, furthermore, the course icon is that of Beginner Day.

The rocket car and the tank's special abilities were not implemented until Scud Race Plus, possibly due to the time constraints. The game will load the head model at a distance, but if approached, the heads will disappear due to the LOD issues. Trying to load Super Beginner Course in attract mode will cause the game to hang on a blank screen, playing only the attract music.

All of the sounds related to this course were unused and despite being called "Extra" in the MPEG Sound Test, there is an announcer for this course:

Scud Race has some unused sounds in the game ranging from an alternate "Go!" voice, the aforementioned Super Beginner course, and of course, an alternate coin sound.

A hidden debug menu is accessible under a certain version of the supermodel 3 emulator with network support. It is currently unknown what causes this menu to show up when networking is enabled in place of the test menu. For the menu to appear, you must have the Link ID set to "MASTER" and supermodel should be launched with the -net command line option. 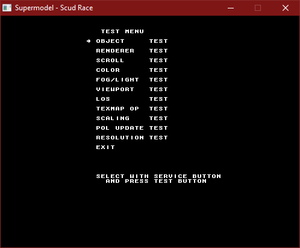 The debug menu that shows when you enter the test menu with networking enabled
(Found by: Xenn)

There are a few objects that went unused in the final game.

A Ferrari F50. This was likely only used in very early stages of development, as there is no interior, wheel or lower LOD models. 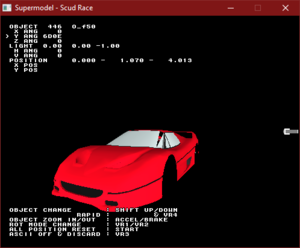 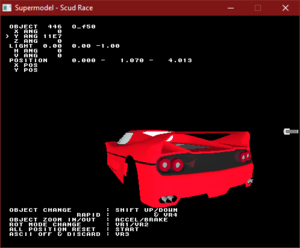 The car from Daytona USA. Like the F50, it is also missing interior, wheel and lower LOD models. 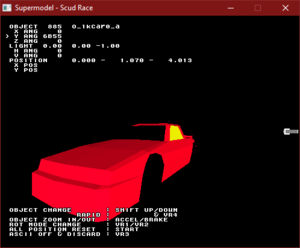 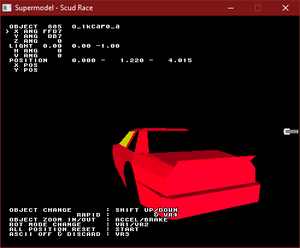