These portraits of Skip and Eneg may have been designed for dialog boxes like those seen below. (If the close-up of Eneg is hard to recognize, it's because he lacks that philtrum between his nostrils in all other art.)

The retail Mac version has no save or load functionality, but these vestigial error messages hint that it was once otherwise. 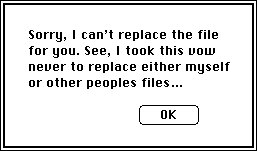 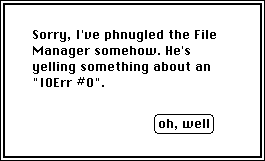 Not even shrinking the game's RAM allocation until it could barely launch or deleting all of its PICT resources were enough to trigger these two alerts. (In fact, the game played as usual with the puck and paddles floating in a black void!)

On the title screen, the credits for Gene Portwood and Lauren Elliott will trade places (up to three times, if you don't click first). This graphic suggests that something similar was planned for the about box, but no combination of modifier keys, other input, circumstances, or waiting has made it say anything other than "Gene Portwood & Lauren Elliott".

CODE 4, the disk check routine, contains the signature of the firm behind it: