A series of hidden screens can be accessed through the following steps.

To simplify the newer code (the 3.00 code is simple enough as it is) to 1P Move Right + 2P Fire Down, put these codes in the given MAME cheat xml:

Use 1P Start / 2P Start to advance through the following screens.

The first screen is a simple set of game credits with a cycling rainbow palette. 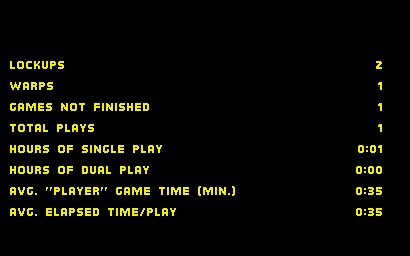 If the game has encountered any errors since booting up, register information will be displayed on the third page. Otherwise, the screen on the right is displayed.

Pressing either Start button will send the player back to the title.

The following set of credits and an early name for the game can be found in the main CPU at 0xFFEBC2B0:

It's worth noting that the early name was carried over to the game's spiritual sequel, Total Carnage. 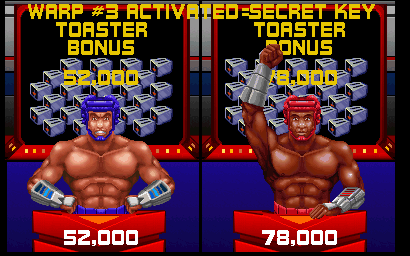 In Revision 5.00, an error handler in the form of a "secret warp" was added to the game to mask some hard-to-locate bugs. A special flag is set in CMOS when a game is started, and cleared when it ends via normal means; if the game crashes or hangs for more than a few seconds, a watchdog timer resets the hardware, and the boot code checks this flag. If it is set, the game skips the usual hardware tests, checks a few variables (such as the player scores) to make sure they're valid, and jumps to the "secret warp" screen (the "#3" is a red herring; there are no other warps). In a one player game, the player will receive 13 of each prize; in a two player game, Player 1 will receive 26 of each prize, while Player 2 will receive 39 of each prize. After the prizes are tallied, the game progresses to the next level. 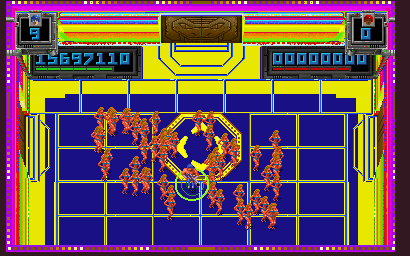 In Revision 8.00, an extra room—the Outer Pleasure Dome Area—was added below Key Room #2. This area can only be entered if the player(s) collects 10 Keys throughout the game.

This is a simple bonus area with a rather blinding rainbow color palette. Ten waves of Showgirls will spawn, with each individual showgirl fetching the player 1250 points. After that, a small wave of enemies will spawn, then the player(s) can leave. 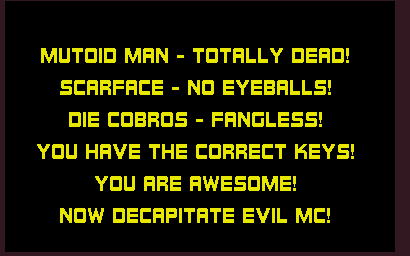 After displaying the above text, the player(s) will be taken to the final boss.

Several room texts changed in Revision 8.00. Most were changed to give tips on unlocking the new Outer Pleasure Dome area.

The design team didn't really know if players would be able to reach the end at all, but when they did, and those players started asking about an area that didn't actually exist, the developers added the Outer Pleasure Dome in Revision 8.00. The text was removed in Revision 6.00 to stop people from asking about it in the interim.