Sora (also known as ソラ sora - Suguri II) is a fast-paced 2D horizontal shooting game in which you play as a girl named Sora. Your main goal is to fight through hordes of enemies to advance to the next level.

Its initial official English localization in 2012 was done by OmegaTH, which later turned out to be a fake company name orchestrated by a troll, and the translation was deemed to be terrible. However, it was still regarded as the official localization for years, until Fruitbat Factory released theirs in 2016.

Unused dialogue, seemingly intended for the fight against Star Breaker in Stage 6. Given their formatting and filenames, this may have been intended to be typed out for a cutscene rather than the dialogue box (text intended for the latter is stored in files named TEXT_TALKXX, with XX being any number). It's completely untranslated in the OmegaTH build, but is fully translated in English in the Fruitbat Factory release. None of the audio files pointed at here remain in the game's sound files.

A sample comment found in the game's TEXT_COMMENT file.

A translator's comment left in the TEXT_STORY regarding the gunbarrel weapon's description.

Due to the poor quality of the initial 2012 English translation, courtesy of OmegaTH, the translation was completely redone years later by Fruitbat Factory and released as version 1.2.0, with some minor updates released later. As such, the dialogue is completely different between versions 1.1 and 1.2.x.

Oddly enough, the intro, credits, and post-Stage 1 cutscene used Comic Sans for their text. The 2016 Steam re-release changed that to a more professional font. Also, the Steam re-release talks nothing about reploids, likely due to that term already being coined by the Mega Man X series.

The kanji in the logo was removed in the 2016 Steam release. Also, the text for the side-scrolling menu was made slightly smaller and had their alignment improved, and the orange line was centered. Additionally, the logo was made a little bigger and the background was stretched.

The text saying "SUGURI II" was made allcaps and had its font changed to match SUGURI's Steam logo for the 2016 Steam release. The background is also stretched here in the Steam re-release.

The loading screen was changed. Also, the loading times were reduced by using a more optimized engine.

Also, while there's significantly less space for text due to the new font being bigger, it is also much easier to read.

Text was added to the gameplay sections of the tutorial stage. 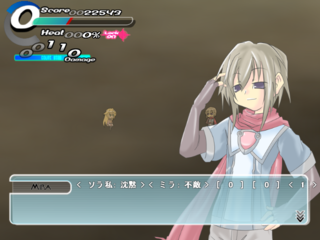 There are two variants of the pre-battle dialogue against Mira in Stage 3; which one shows up depends on whether the player dodges or gets hit by their blades right before the boss fight. The variant for getting hit is incomplete in the initial English release, as there's only one partially complete line of dialogue ("Goodness! Your reflexes are"), after which only Japanase text displays, seemingly the original Japanese dialogue, though only partially working (notice how the text sticks outside the box and the text string displays dialogue for both Sora and Mira). This was fixed in the 2016 Steam re-release.