Oddly enough, the Japanese version was actually licensed by Nintendo.

The publisher's logo was also changed here, with the Super Sprint logo and player select options moved down to fit the Altron logo.

The "VISION" billboard replaced Tengen with Altron. This applies in the Game Over screen as well. 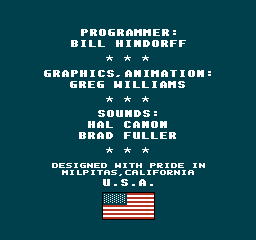 The US version has a staff credits screen that appears after watching the first demo. This was removed from the Japanese version, presumably for being too... American.