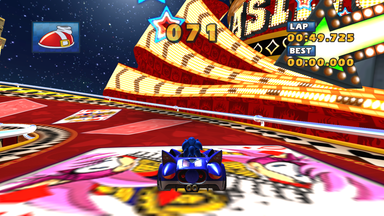 In all initial releases of Sonic & SEGA All-Stars Racing, the developers accidentally used fan art of Sonia the Hedgehog (one of Sonic's siblings from the Sonic Underground cartoon) by DeviantArt user ArtByRiana. Shortly after this was discovered, Sumo Digital quickly patched it out of the Xbox 360 and PlayStation 3 releases, replacing it with official art of Amy Rose.

While the PC version was also patched, the Sonia art can still be seen with lower graphics settings. The Wii version was never patched due to its internet limitations.

Though an accidental inclusion, it remains notable for being only the second time any of the Underground-exclusive characters have appeared in an official Sonic game (the first instance being a 2000 Tiger LCD game based on the cartoon).