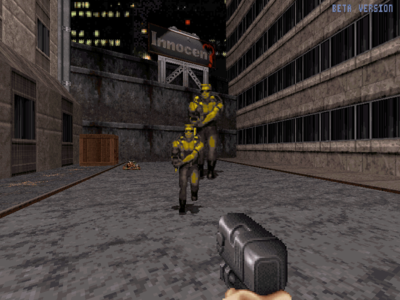 Duke Nukem 3D 0.99 is a leaked build of the shareware demo that snuck out onto the internet back in the day. The included readme shows that it was intended for a magazine for previews. Compiled on January 4th, 1996, the game is in a near final state, but it still has many differences.

DUMMYDUKE is a boss that does not appear in the final game.

There are two of them: one big, and one small. The small one is slightly taller than the player is, while the bigger one is much larger than the player. The big one has 2,000 HP, but the small one has 1,000 HP. In-game, the big one's health appears to be bugged, as a single Pistol shot will gib him.

Both of them will fire a rapid-fire hitscan weapon occasionally as their primary weapon. However, they have slightly different behavior. The smaller one will occasionally teleport around like an Assault Captain, but with no graphical warning beforehand like the Assault Captain does. The small DUMMYDUKE also seems to prefer getting as close as possible to the player. Meanwhile, the big DUMMYDUKE is very slow and can never catch up with a running player. It doesn't seem to prefer getting close to the player, unlike the smaller DUMMYDUKE.

When a DUMMYDUKE is first spawned, he will appear to be a normal Duke. However, once the player sees him, he will swap his pallete to a darker, muddier one, change size (using similar effects as someone being hit with the Expander in the final game would) until he is the correct size, then start attacking the player.

Unlike multiplayer bots, DUMMYDUKEs will not be attacked by other enemies.