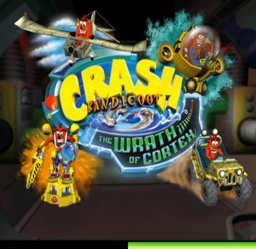 Crash Bandicoot: The Wrath of Cortex is the first game in the series released on multiple consoles, and is also the first Crash platformer not developed by Naughty Dog. Originally being conceptualized as a free-roaming title, the final product was cobbled together in about 1 year of development after a fallout with Universal Interactive and Sony. Most long-time fans say it shows.

Pictured here is a loading screen used in early builds, such as the E3 2001 demo. Strangely, the image itself can be found in the data for the Xbox and GameCube versions, but not the PlayStation 2 version.