From The Cutting Room Floor
< Template:FeaturedFile‎ | 11-18
Jump to navigation Jump to search 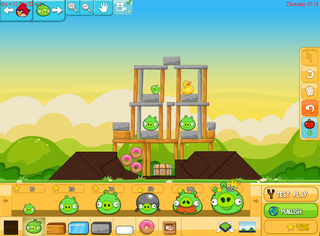 Bad Piggies for Adobe Flash is Rovio's aborted attempt at a level creation platform for the Angry Birds franchise that predates the released game of the same name. Having never been announced before its cancellation, it only reached the public eye through a long-abandoned Google Cloud website where builds from March and May 2011 exist to this day. While Rovio's vision of a "social" Angry Birds game never came to fruition, their work didn't all go to waste - the underlying engine was finished and used by a slew of sponsored webgames as well as Angry Birds Friends, while the core concept was reworked into the spin-off we all know and love.

This image shows the level design UI for the later build.