Temple Run is a massive hit to infinite runners that sparked many knock-offs and and even a not-so-great sequel. 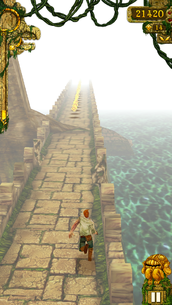 The thunder effect that is seen flashing during a play.

As of Version 1.6.1 (released September 13, 2013), the infamous no-death-run glitch was patched. However, they didn't do it without hinting at it.

If you manage to do it correctly, instead of running in a line infinitely, it will instead start to thunder and the screen will flash and the game will go back normally, only thundering during said play. As well as that, you will get an objective with the title "The Glitch" and the description reads "Tried to cheat :-)". It is the last objective to be listed, and it isn't normally there if you've never done the glitch before.