The Legend of Zelda: Ocarina of Time/Oddities 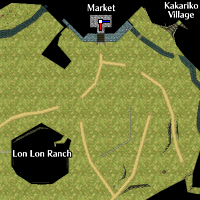 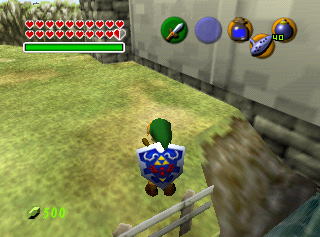 To the right of the exit from the Market into Hyrule Field, following the flowing water, there is a section of ground next to the moat that has been lowered, allowing Link to climb out of the water.

To the south of Lon Lon Ranch, the marked path goes through a fence. The actual break in the fence to travel through is some distance away. 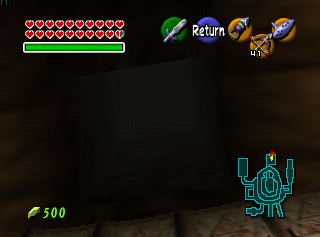 Present in the ceiling of Darunia's room is a rectangular shaft. It serves no purpose, but is nonetheless still present in Ocarina of Time 3D. 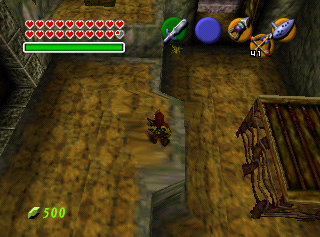 On the second floor is a platform that has been stretched so it juts out a little further, making it easier for Child Link to jump across the gap. As with the ground near the Castle Town moat, the texture here is stretched. 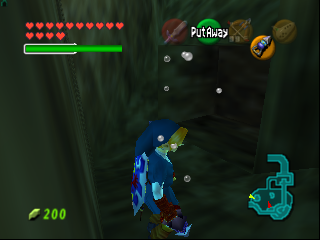 Under the water is an alcove in the cave wall below and to the left of the square platform. It is inaccessible via normal means, as Child Link cannot dive far enough to reach it (even with the Golden Scale) and Adult Link cannot access it due to the layer of ice that covers the water.

Though it is built in a way to suggest it had some purpose, it is not the right depth or shape to be an exit, and it contains nothing in either era. Despite this, it is still present in the 3DS remake.

Chamber of the Sages

The medallion platform is surrounded by invisible walls, making it impossible for Link to fall off. However, as this location can only be accessed during cutscenes, Link is never able to walk around here anyway. 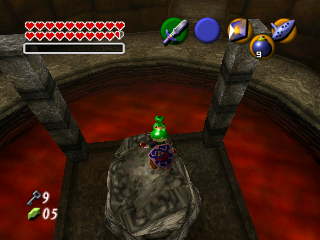 Landing on or simply hovering over the top of the four-eyed statue in the rotating statue room will net Link a large magic jar, though it doesn't actually replenish any magic. This is the only instance of a hidden magic jar in the game.

It was removed from the 3DS version.

In the room with the firewall that chases you, there is one triangle on the lava floor next to the door that leads to the firewall maze that is not marked as lava, so you can stand on it without taking damage.

Though the Shadow Temple is an interior location, the sun orbits its skybox. While the sun is not visible from the Temple's interior due to Link being surrounded by walls from start to finish, in certain emulators it is possible to see a very faint lens flare when looking in its direction.

This is also present in the 3DS version.