The Legend of Zelda: The Wind Waker/Hidden Level Features

Hyrule Castle has some very low-polygon architecture not seen during typical gameplay. It's possible that this is a remnant of a larger Hyrule Castle area, as this kind of low-poly modeling is found in Dragon Roost Island and the Tower of the Gods to show the outside portions of their respective dungeons. 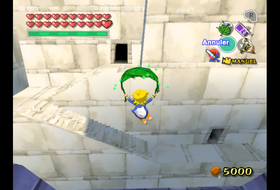 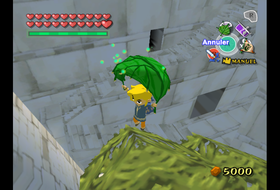 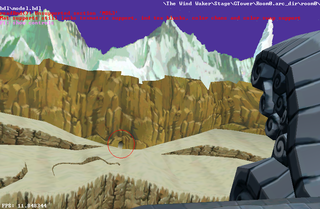 The surrounding geometry of the top of Ganon's Tower includes a small cave nestled in the mountains. This isn't normally seen because the camera angles never allow for it, and the only time you have control of Link is when the tower is surrounded by waterfalls.

It may have been that the path to Ganon's Tower was originally longer and, rather than enter directly into the tower, the cave near Hyrule Castle led to another part of Hyrule where the tower was located. 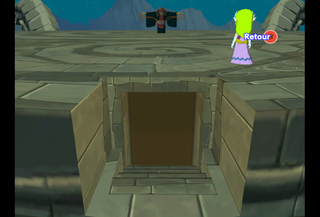 This door is, logically, where characters would exit to the top of Ganon's Tower. It's normally impossible to see due to the cutscene that immediately plays upon spawning into the map. This is also the case during the fight with Ganondorf, where the door seems to have disappeared (possibly because the waterfall graphics cover it up).

The inclusion of the door may have been so that the developers could easily distinguish the sides of the tower.

Top of the Forsaken Fortress Tower

There are two versions of the inside of the Forsaken Fortress' tower: one seen in the cutscene before Link meets the King of Red Lions for the first time, and one where Link battles the Helmaroc King. The cutscene-only model actually has spikes all around the rim of the tower, which would make the fight more difficult because Link would be trying to avoid the Helmaroc King and stay in the center of the tower.

You can only see this by using the map select.

Triangle Island from atop the Tower of the Gods 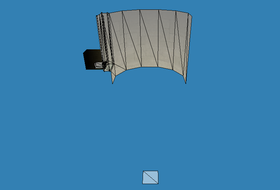 Within the boss room of the Wind Temple there is a collision platform that is hidden underneath the room. It is shown near the bottom of the picture below. It is invisible in-game and is normally unreachable. One way to reach the platform is to load this room with the map select menu and select starting point 1 for Link. 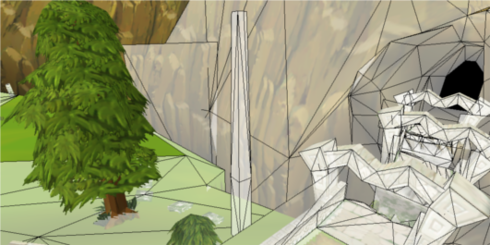 Near the entrance to Ganon's Tower in Hyrule sits some odd collision data. There is no model to go with it, so it can never be seen. The data appears to represent a flag post, like the ones seen on the bridge from Hyrule Castle's island to the mainland. Interestingly, if you shoot an arrow or use the Hookshot right in the place the flagpost should be, you can hear a wood collision sound, meaning that it was intended to be added. The collision still exists in The Wind Waker HD. 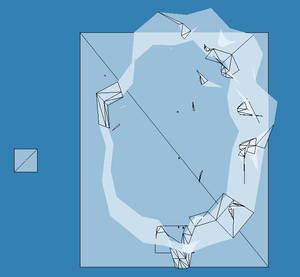 Jabun's room has two points of interest and the picture above demonstrates this. It is a top down view of the collision in Jabun's room where the normal entrance is at the bottom. To the left and outside of the main room, there is a small square piece of collision. On this piece of collision there is a spawn point for Link represented by a small orange dot and can be seen more clearly if you click the image to enlarge it. The other point of interest is that there is a spawn point for the King of Red Lions as well, located in the northwest part of the larger collision area just outside the main room (represented by a purple dot). Again, it is best if you click to enlarge the image to see it.