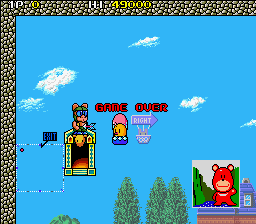 Taito Kumagaya Laboratory developed this game; the proof of this is a hidden company logo in the attract mode. To see it, wait for a demo to start playing, then press 1P Button 1 3 times. 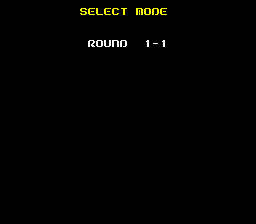 The code works in all versions of the game, but any selections past Level 5-4 will either take you to a bonus stage or dump you into a glitched, unplayable map.

This animation should be used when throwing bombs, but it isn't. Oh well.

The only power-up that doesn't appear in the game. Its use can only be guessed at. One possibility is that they were meant to be collected to be used on the cages in order to complete the levels, as that idea would eventually resurface 19 years later in NewZealand Story Revolution for Nintendo DS.

An odd little enemy that appears to be riding a jet pack! It never spawns in the game (even from the Wizard), so both the enemy and the vehicle are unused.

However, in the "World, prototype?" version of the game, using the Round Select code detailed below and selecting Round 4-2 (as this version of the game ends at 4-1) takes you to a playable if unfinished map (shown in the video above) where this enemy will spawn! It cannot be killed, flies around in a vague S-shape pattern, and will kill Tiki on contact, just like the spike enemies.

These tiles are loaded with the Heaven tileset, but they don't appear in those levels.