Just another one of those Breakout-type games, this time with co-op multiplayer!

Frames of the pyramid block cracking rather than dividing when hit as it does in the final.

A mahjong tile, which may have been intended as a type of obstacle.

A rounded block. May also be a mahjong tile (white dragon), since it is stored underneath the previous one.

Two frames for what appears to be a bubble.

A piece of glass or ice, another possible obstacle.

What may have been an unused background pattern. The graphics are set up in order of appearance in the ROM. 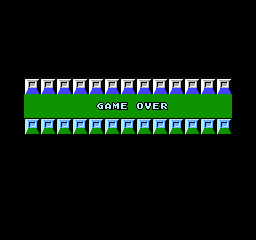 There is a total of 30 valid levels in both the US and Japanese versions of the game. Upon completing level 30, the game unceremoniously ends with a GAME OVER screen - kind of a slap in the face, considering how difficult the game is. For some reason, the Japanese version continues on to level 31, 32, etc. afterwards, which are nothing but garbage; the US version at least fixes this oversight.