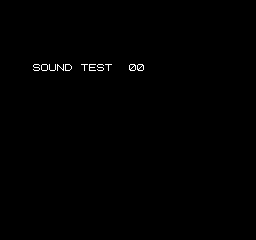 Hold A + B on Controller 1, then press Reset. Press Left or Right to select music/sound effects, Down to play music, and Up to stop the currently playing music.

Note: Due to an error in the programming, the low digit of the sound code is not properly clamped to 0..$F. Therefore, the sound code that should be $10 is actually 1G, $11 is 1H, etc. Once valid characters are exhausted, the second digit will merely not appear. In the Japanese version, this happens quickly, as there are few extra characters after the uppercase characters; in the US version, a full lowercase alphabet and some more characters were added, so it happens later. In the Japanese version, the last valid sound code is somewhere in the $4x range; in the American version, it is 4w ($40) (though glitchy data will play in future sounds at random). 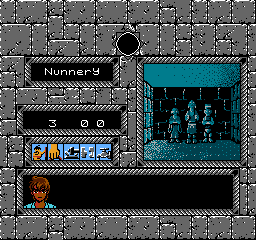 Start the game, then take all items on the table and exit the lab. Now enter the Nunnery directly north. When in the Nunnery: take the Ixmol Jewel held by the statue, wash the Ixmol Jewel, put Sword, wash Lighter. Then you should see the message "Nothing has changed", now hold Select + Start and press A and the numbers "3 00" will appear.

Hold B, press Up or Down to select an area, press Left to change to the new area and then Start to begin the new area.

Press Up or Down for item select, press A to turn item "on" or "off" the new item and press Start to enable the changes.

Additionally exit the debug menu by pressing Start, then highlight "PULL", hold Select + Start and press A. The number should appear, then press Left or Right to switch between sounds and press Up to listen to it. Press Down to stop listening to the selected tune.

There are hidden version dates in both regional versions of the game at the end of the PRG ROM:

for the Japanese version, and

for the US version.