Top Gunner -- or Jackal as it's probably better known as -- is an overhead game set in a warzone. Rescue the good guy hostages in your jeep while annihilating the enemy forces (also in your jeep.)

While the setting of Jackal is intentionally vague, Top Gunner, thanks to a set of graphical changes, is definitely meant to take place in Vietnam.

The flag on the player's jeep is a nondescript orange and blue flag in every other version but Top Gunner, where it's a star-spangled banner.

Red flags (presumably the North Vietnam flag) were added to the enemy gates and campsites in Top Gunner.

Strangely, in every version of the game, the final area and the game's progress map have the same red flags. 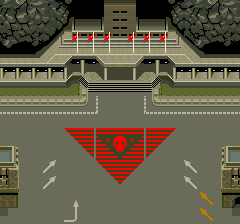 Five-pointed red stars were added to most of the enemy vehicles in Top Gunner, to really reinforce the whole North Vietnam thing. The only exception to this is the Molotov Cocktail-throwing van.

There are four versions of the game (excluding bootlegs) currently supported by MAME. One ROMset, known as jackalr, has support for rotary joysticks, which allows the player to adjust the direction their jeep's machine gun is aimed at. This was likely a location test version, as its main program ROMs are labelled "Q" on the PCB and very little information seems to exist about this version online. Because the other versions only support standard 8-way joysticks, the way the player's machine gun works differs between them. The Japanese version, or Version T, has the gun shooting towards the direction the player's jeep is facing, whereas the US and World versions, Version U and V respectively, has the machine gun fixed to always shoot northwards (which was the control scheme used for the NES port).