Grand Theft Auto: San Andreas, the third game in the Grand Theft Auto III era, was originally released in 2005 to high acclaim from both fans and critics ultimately becoming the best-selling PS2 game of all time. With sales of over 21.5 million units across all formats, in 2010 it was ranked as the 3rd best-selling game of all time. The game has a huge amount of unused content within it as well as evidence of other features that were removed or changed during its development cycle, one of which it's discovery had consequences so far reaching that they continue to be felt today.

What do I mean? Because of the controversy with the Hot Coffee mod, the ESRB started to include unused content in the rating process. This caused many developers to start cleaning after themselves better, and resulted in content which may have otherwise been left in games to be deleted. Of course, this means less content for us to find.

In the Lanayru Desert area, each section is stored in separate rooms. However, most rooms have the geometry of the other sections out of bounds and inaccessible. Some of these areas are different from the normal versions of said areas.

They can be accessed with the Levitation and Moonjump Gecko codes, or alternatively with glitches like Back in Time warp.

Going to the Temple of Time area in Lanayru Desert ("F300_4"), and flying/glitching over the wall, you can enter an early version of the main area.

In the picture above, we can see a wall behind the bird statue. This wall is not in the final area. The Timeshift Stone is also absent. 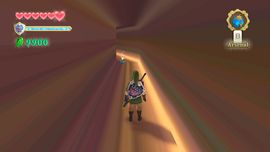 This strange corridor is located between Lanayru Desert & Temple of Time (F300 / F300_4). We can access to this corridor using the same method (Moonjump).

The walls at the end of the two main rooms were extended a bit to fill the whole screen.