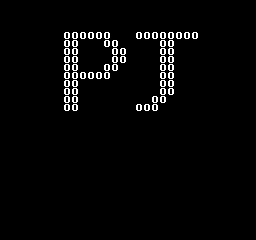 As with many Nice Code games, pressing Up, Down, Up, Left, Right, Left, B on the title screen will briefly display a credits screen. PJ likely refers to the Power Joy series of Famiclones which many Nice Code games have been released on. Unfortunately the CoolBoy 400-in-1, the only dumped multicart known to contain War Zone, contains a hacked version of the game which removes the credits text below the PJ ASCII art.