A western-themed shooter similar to the arcade game Blood Bros. ...Well, it says it's western themed, but there's huge robots. Probably best not to ask. 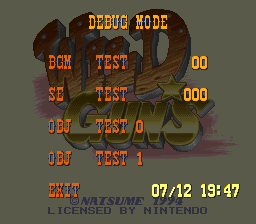 Starting at SNES address $02DDDC are the broken remains of a debug mode. Unfortunately, it wasn't updated along with the rest of the game during development, so as a result, most jumps to subroutines in other banks are to invalid addresses. However, it is possible to at least partially restore it.

Press Start or X to play a song. This version only goes up to song $10, unlike the music test in the option menu that has a max limit of $17.

Press Start or X to play a sound effect. The max selection is $7F, but sounds only exist up to $43. 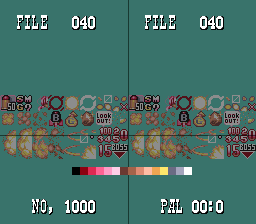 It's currently unknown what, if any, differences exist between "OBJ TEST 0" and "OBJ TEST 1".

A graphic of the word SAMPLE is stored alongside the title screen.

These developer credits are located at 0x1BF in all versions of the game. Similar text can be found in other Natsume games for the SNES. 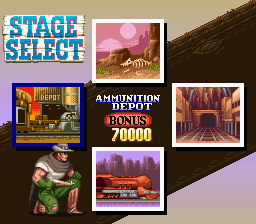