Wonder Project J follows the story of a robot named Pino on an adventure to find his creator. 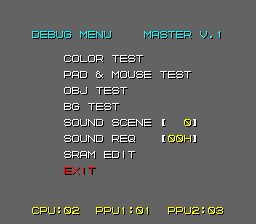 Wonder Project J has a debug mode which is accessible when the ROM's internal checksum equals zero. To access it, do either one of the following:

After that, hold L and R while turning on or resetting the game to enter the debug menu.

To use the sound test, select a music bank using the "sound scene" option (press A to load the selected bank) and then use the "sound req" option to play a song or sound effect. Sound numbers 01 to 0F play music (although the number of available songs depends on the current bank), and numbers 10 and up play sound effects. 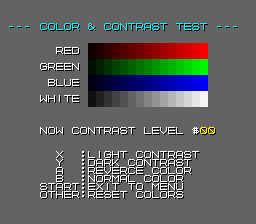 This screen is used to test various color and contrast levels. For some reason, the actual controls differ from the ones listed on screen; A/B/X/Y have no apparent effect, while all other buttons (including the D-Pad) return to the main debug menu. There doesn't seem to actually be a way to adjust the contrast level as described. 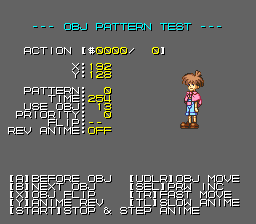 This screen allows you to view the various sprites and animations in the game.

Contrary to what the screen says, A displays the next object and B displays the previous one, not vice-versa.

The D-Pad allows you to move the current sprite freely around the screen, while holding R speeds up the movement. Pressing Y plays the animation in reverse, while holding L plays it in slow motion. X flips the sprite horizonally and/or vertically, and Select changes the sprite's priority value (though this has no visible effect due to the lack of separate graphic layers on screen).

The description of the Start button suggests it was supposed to be used to view animations frame by frame, though pressing it here simply returns to the main menu. 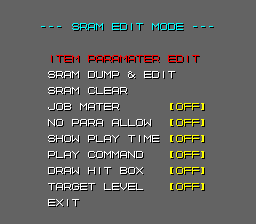 This screen is for editing or erasing the contents of save RAM, as well as enabling/disabling some debug features which remain enabled in between gameplay sessions. The "item paramater (sic) edit" and "SRAM dump and edit" options no longer do anything when selected, but the "SRAM clear" still erases all save data when selected.

The "job mater" (meter) option causes a sprite to appear along the right edge of the screen as a way to monitor CPU usage; the farther down the screen it is, the more CPU time is being used per frame. Enabling this option also causes the debug menu to automatically appear on boot without having to hold down L+R.

The remaining options are currently untested, though the "draw hit box" option is probably self-explanatory.