.flow is one of the first fangames inspired by Yume Nikki, featuring the same dream premise with a darker tone not unlike Silent Hill. 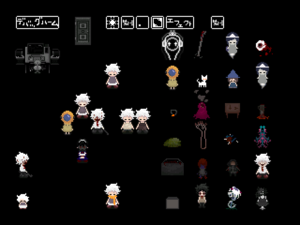 The game contains a rather extensive debug room, accessible either by interacting with an out-of-bounds event in Sabitsuki's room, manually changing values in the game's editor, or by replacing the file MAP0002.lmu (Sabitsuki's real world room) with MAP0003.lmu (the debug room).

Going roughly from top to bottom, left to right:

Two maps added in v0.193/v0.194 are unlabeled, but bear resemblance to the used Hell map (Map0153) and appear unfinished. Two FC Sabitsukis are present with the same coding in each map. The plant one on the left displays a picture overlay titled "blooooo", used as a background in a map within Disposal, while the other teleports you to MAP0285 at coordinates (030,016). These maps can only be accessed by interacting with Rust in the debug room, suggesting they were under testing before being scrapped. 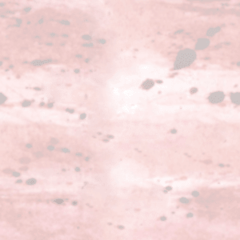 The overlay in question. 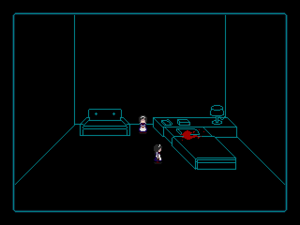 A map that used to be accessible via speaking with a Cleaner in the Sweet Sugar Hotel, but was rendered unused when it was replaced with a newer map. Speaking with the north Cleaner sends you to the same spot it would normally. 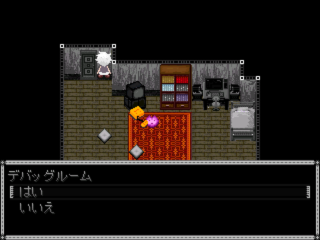 As stated above, Sabitsuki's real room has an unused event to warp to the Debug Room, located in the wall next to the door. This was most likely placed here for quick access in the game's editor, as later versions of the game have functionality for the door that replaced the original debug room's warp event. The text displayed simply states "Debug Room" followed by Yes and No options. 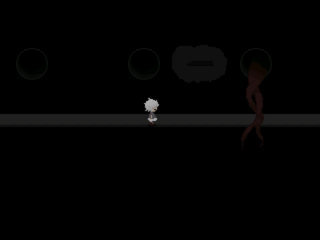 An odd event is present out of bounds in the passage leading to Disposal from Snow World. It's activated via touching it when variable 34 共通ランダムイベント (Common Random Event), a variable that is set every time you enter flow, is between 20-59.

Once activated, it will turn on switch 387 地下階段電気OFF (Underground stairs electricity OFF), flash the screen once, and then change the graphics of the lights in the staircase to be off. Why this functionality was disabled is unknown, but presumably it would've been used randomly when walking through the passage.

A strange character known by the above names in the community actually has a full set of walking sprites! These go unused, however, as only one left-facing and right-facing sprite from this set is seen in different events, and her third event uses completely unique sprites unrelated to these ones.

An alternate version of the Gas Mask effect with Sabitsuki's hair in twintails. Like most of these different graphics for Sabitsuki, they can be obtained in the Debug Menu but are otherwise unused.

Scrapped effect for Sabitsuki wearing a scarf. Only the walking sprite appears to exist.

Scrapped effect for Sabitsuki wearing a Santa hat. Unlike the scarf, this one's implementation is mostly complete, with 8-bit sprites, pinch sprites, and a face graphic.