Before Tecmo Super Bowl, there was 10-Yard Fight.

As the game was published by Nintendo outside of Japan, the copyright was updated accordingly. As well as this, the score display at the top was removed and everything else was moved up by 16 pixels.

While the different versions look almost identical superficially, the gameplay was retooled for the international version to play more like a traditional football game. In the Japanese version, the 1 player mode has you always playing in offense (even if the AI intercepts the ball) and failing to get to first down after fourth down results in an instant game over. The latter also uses the scoring system from the arcade version, which was replaced with a standard scoring system for the international version. 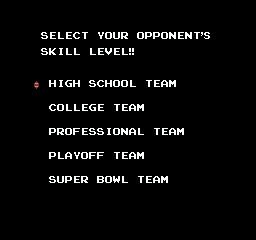 The international versions allow you to pick the starting difficulty. The Japanese version lacks this feature.

The football helmet graphic was redrawn for the international version and is considerably smaller. As well as this, the HUD was changed quite a bit between versions: