Alex Kidd is back, though a tragically wacky frying pan-based incident left him amnesic and unable to punch anything. Venture through themed worlds and get the six miracle bells to defeat Ziggurat, The Pyramid That Eats. 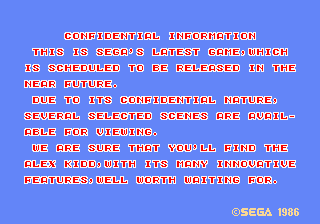 A message from a work-in-progress build is still in the game. The subroutine to display this message starts at 000FF6, but it's not referenced at any point in the code. Enter this code in MAME's alexkidd.xml cheat file and enable it to see this message in place of the high score table.