From American McGee, comes one of his lesser-known episodic games. Taking inspiration from the Katamari series and Super Mario Sunshine, Grimm (who may or may not be Wario's cousin) embarks on a quest to piss on (metaphorically and... unfortunately literally too) famous and obscure Fairy Tales, turning them back into the messed-up fables that they were intended to be. Grimm was available on (long since defunct) gaming platform, GameTap. It was re-released in 2013 on Steam and GOG.com (the former of which has also been delisted).

A video was uploaded prior to the release of Episode 8, Beauty and The Beast, by American Mcgee's official YouTube channel. This takes place in scene 4, showing Grimm with a "reverse Grimm effect" where instead of turning the environment dark and gloomy, it makes everything light and happy. This was used by the devs for testing game elements.

In this early footage, the timer and Dark-O-Meter HUD elements are missing. On the top left corner of the video reads the text "Lighting needs to be rebuilt". The NPCs still freak out when Grimm gets near them, despite him cleaning the level. The sky's color looks minorly different from the final, however, this could just be an effect of the low quality. Not much else is different from the final.

As seen in concept art, the character Jack from Episode 18, Jack and the Beanstalk, was at one point going to have a simple color palette swap for his dark form, common for most characters. In the final release, he is instead seen sporting a more emo design. Interestingly, the final portrait for episode 18 uses this dark form. 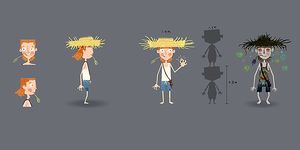 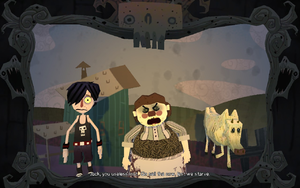 While the final game has 23 episodes in total, a trailer prior to the first episode's release, stated there were to be 24. In the episode select menu, the portraits are sorted in a four-by-two grid. There is an empty space where episode 24 would be. Whether this was a typo that managed to end up in the trailer, meaning that episode never actually existed or if episode 24 was planned but later canceled is currently unknown.

In episode 6, Godfather Death, there is an odd oversight where Grimm will still talk despite the character voices being turned all the way off. It seems the audio file for when Grimm wakes up, after being put to sleep for years by Death, was put in the wrong audio channel.