Anachronox is a science-fiction RPG with gameplay reminiscent of Final Fantasy VII and Chrono Trigger. Plagued by a long development cycle and a story seemingly too ambitious for one game (it ends on a major cliffhanger), the game sold very poorly, despite high praise from critics.

To activate the debugging material, press ALT+SHIFT+F10. That enables the debug mode which shows additional information all over the screen and allows to access the console with "~" key. The console can be enabled by editing the Default.CFG file in the CONFIGS folder. 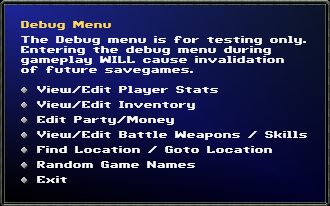 The main debug menu can be accessed by entering "invoke 1:86" (without quotes) into the console. 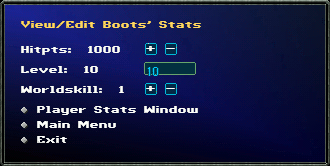 This menu allows you to change the HP, level, and skill of any character in your party. 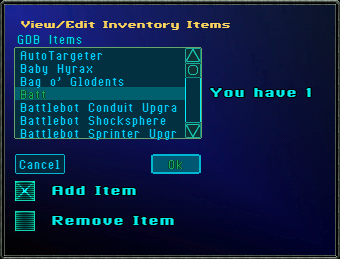 This menu allows you to add any item to your inventory. 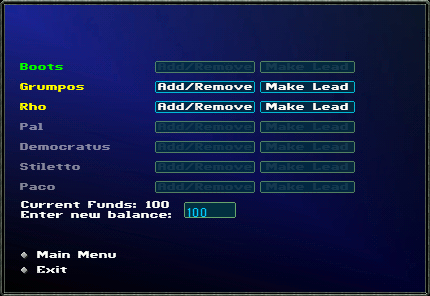 This menu allows you to change the characters in your party, as well as adjust the number of credits you have. 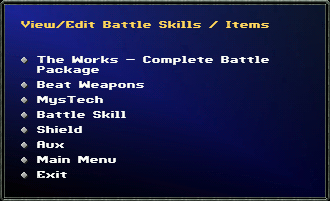 This menu allows you to add or change the skills your party has. You can also add any battle weapons to your inventory from this screen. It is very similar to the inventory editor. 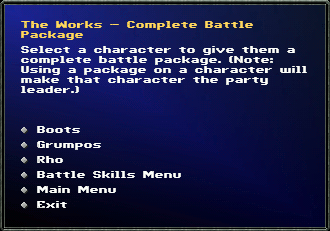 Each character has a unique line after receiving the items: 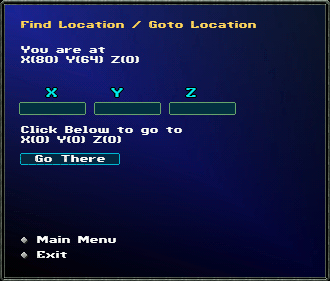 This menu allows you to go to any XYZ co-ordinate you input. 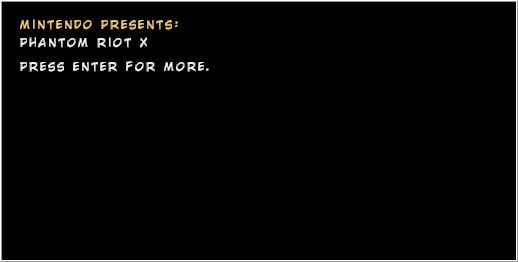 This menu opens a window with randomly-generated names of supposed video games belonging to "Mintendo".

It is not clear why some of the functions were removed in the patched version (such as level select). 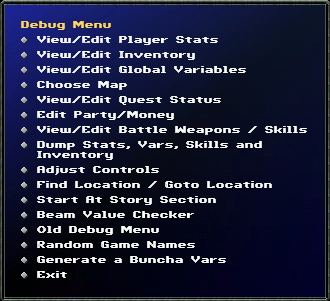 The old debug menu can be accessed by entering "invoke 1:860" (without quotes) into the console. 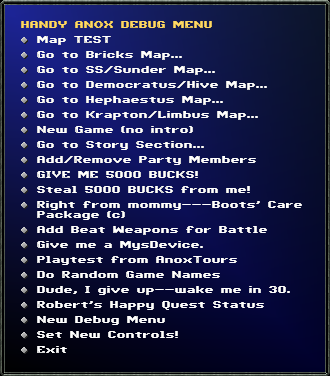 There you can warp around the world, track quest status and even set an alarm clock. Some of the functions are unlisted because they are either unfinished or not implemented. The debug menu from the 1.0 release version of the game features most of the functions found here but more or less completed and working. 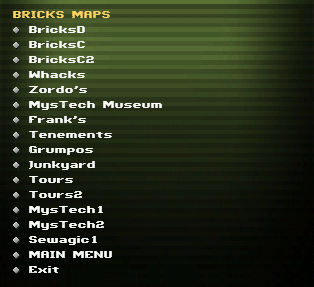 Apparently Main Menu did not exist when that menu was in use hence start the game with intro cinematic option. The third option does nothing. 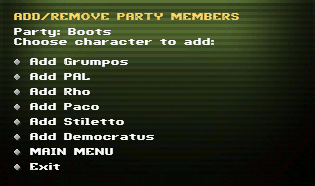 The textures for numbers are still in the game's files but have different names, so to make them display they needed to be renamed first. 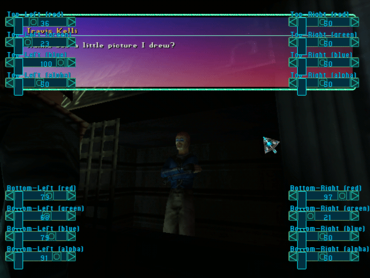 Typing "windowcoloradjust" into the console will display the menu that allows to customize the default color scheme for dialogue boxes. Some planets got customized dialogue boxes and can't be altered. The menu allows to set color for each corner of dialogue boxes (rgba) which it blends together afterwards.

Highlights paths and control points used by the AI and Characters.

One way to call it is by entering "exec testjosh" into the console.

It is a shortcut which executes a list of commands. It changes controls a little, allowing to switch between the AI view-modes by pressing F1-F4. From 0 to 3, 3 - shows everything.

The list of commands executed can be found in the following file:

This map was not originally released with the game - instead, it was introduced along with a couple of other maps in a .rar folder titled Anachrodox: a joint effort by the Anachronox team to create a database about how the game works for modders interested in modding the game. However, unlike the other maps in the .rar, pretty much all of the entities in this map do not work, making it near useless for modders.

This map is in the Steam and GoG releases because these releases include the unofficial v1.02 Build 46 Patch, which included the level for some reason. It appears even more broken in these releases because it's missing textures that were only in the Anachrodox .rar file. The map is named after Joey Liaw, one of the programmers who worked on Anachronox and contributed to Anachrodox.

This map contains nothing but a rectangular room with a hatch in the middle.

Looks like it's a shopkeeper from Roberg (the PAL-18 Dreams map that is a part of Baltown.bsp).

There is a folder among the textures called "Borbors" which hints that he might've had his own map for a shop like Zordo.

From the cut map "Evil Domain". Only posed, not animated.

From the cut map "Azurood". 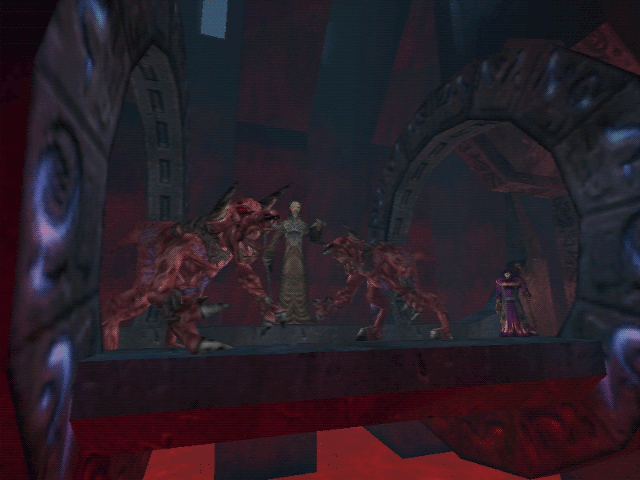 The model is not used in the game, but the monster is shown when highlighting the "Way too hard" difficulty option in the Main Menu: 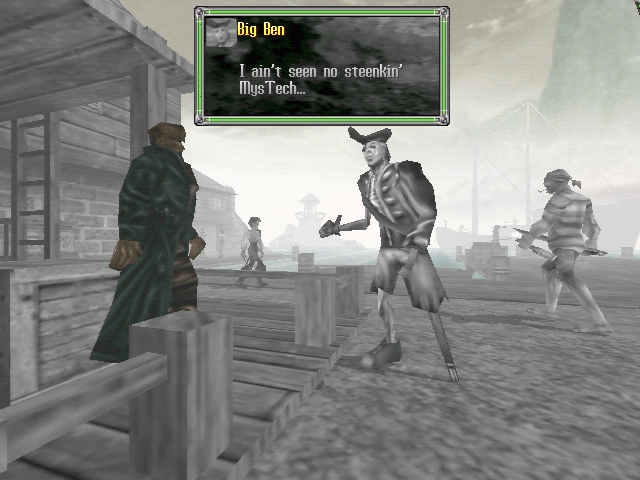 The screenshot name is "Stacks". There's no such map in the release version of the game.

The monster has several animation states and is not commented out from the definition file, although it apparently never appears throughout the game.

Both are supposedly for the "Roberg" map that can be seen in the "PAL-18 Dreams" cinematic. So the map is still present in the game (as a part of "Baltown.bsp") but is only shown for a brief moment. Both characters have an extensive list of animations.

Some of the models, revisions and textures for the old version of Grumpos are present in the archives. The models contain a very similar set of animations to the main version, although the models themselves are quite different.

There is a mod that brings back the old model, along with the portraits for UI.

There's also this version which does not appear in the game, but is present on one of the screeenshots from pre-release. 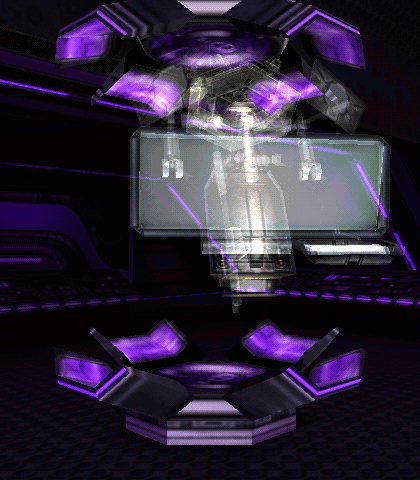 It was either never implemented or scrapped during development. Turns out the following models then were re-purposed for the Villain's Ship section and are used to represent The Cosmic Machine.

List of the assets that were reused for the puzzle:

The following commands are present in Anachrodox's manual but have no effect in console:

The disk can do several transformations depending on the option selected. Acting apparently as a base for the other UI elements.

Supposedly stacks with the disk and acts as a base for the following UI modules:

The spaceship built by Commander Keen. It is probably unused, although is not commented out from the definition file, like many other unused models. There is a mod that brings it into the game.

Apparently there was supposed to be more to this area. Maybe some sort of an actual working casino.

Even though the map was cut from the release the objects are still there. 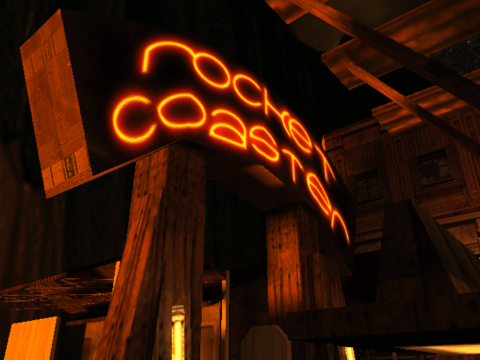 There are some objects related to Rocket Coaster at Hephaestus. There is a sign on the map but not much else.

Makes the character wearing it invulnerable.

These gloves had something to do with the BugBox according to item.GDB, but were never implemented fully. Might have been intended to be required to obtain 'dangerous' bugs.

Listed under Interface items in the item.GDB but appears to do absolutely nothing.

Unused text windows can be called by typing "invoke + window id" into the console. For example:

Then there will be a wonderful cinematic...

Unused dialogue with a lottobot from Casinox Area (bricksc). The bot seems to appear only during the cutscene "K'Conrad Speaks Again". Hence is not interactable.

The dialogue has a unique style: 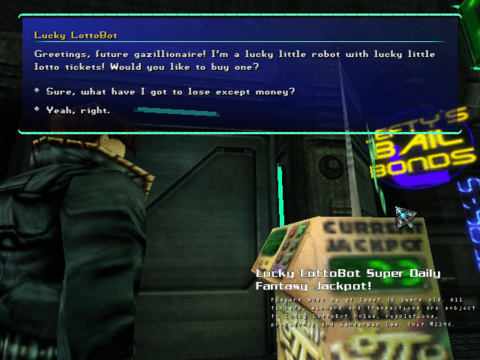 Penthouse Suites (which is a part of Sender Commons map) maybe was intended to have its own map or to be extended.

Timed message (the one that appears on top of the screen):

To reach her do the same as for Falkhan. She's hidden behind the stage at Cold Sweat Sex Machine (Red Light District).

Planet is the in-game cinematic editor. Planet is a spline based cinematic system that allows you to control multiple cameras across 3D paths and timelines. Simultaneously you can control entities on paths, trigger events, manipulate particles, and do just about anything you please. One of the more common team beliefs is that the only true limit to Planet is the person controlling it. [quote from Anachronox.com]